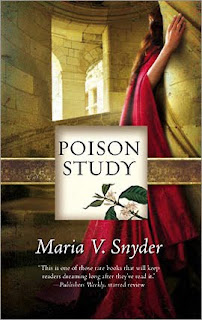 
# of Pages: 425
This is the first book in the Study trilogy.  See my review of the second and third books here.


This book qualifies for the Clear Off Your Shelves Challenge.


Plot Summary:
On the day of her execution for murdering her benefactor, Yelena is offered a bargan: she can either die by the noose or she can become the Commander’s food taster, testing for poisons. She opts for the latter, and immediately begins a series of lessons with the tall, dark and mysterious (and, I must say, quite fascinating) Valek. Being a food taster means that Yelena is in the same room as the Commander during some fairly important meetings and conversations and as time goes on, she gets more involved in court politics. The strict, regimental life that exists under the Commander’s firm leadership is endangered, though, when it becomes clear that someone has access to the Commander’s thoughts. Yelena and Valek must try to save the commander, with the help of their fabulous friends Ari and Janco. Along the way, Yelena learns a great deal about herself, her powers and what motivates her.

My Thoughts:
That is a pretty simplified plot summary - this book actually has a wide array of characters (some of whom don’t show up in the summary above) and a plot that promises to get more intricate as the series continues. But, well, I don’t want to give too much away!
I really enjoyed this book. I thought there were some really strong female characters in it, including Yelena. I was a bit leery at first, when she came across Valek in the first ten pages. “Oh, of course her poison teacher is a hunky assassin who is pure ice on the outside but really just a troubled soul looking for love on the inside,” I thought. And I don’t think I was too off the mark in my assessment of Valek, or of Yelena’s relationship with him. But that doesn’t mean that the two aren’t interesting characters on their own. I tend to gravitate more towards male characters in stories because they are made more complex. But Yelena is complex, too. She faced a great deal of hardship in her past, but she doesn’t ever come off as being morose or self-pitying. She sticks to her guns and charts her own path- or, as much of her path as she can, under the circumstances. And when she needs help, she asks for it, instead of being an idiot who messes everything up by trying to do things her way.
I think, however, that in the books to come, it would be very easy to make Yelena into a Mary Sue character. Everyone who meets her seems to love her (except, granted, for those that want her dead) and she somehow overcomes some serious psychological drama in a fairly short amount of time. In fact, in the Mary Sue Litmus Test referenced above, Yelena already gets a pretty high score. I can see that skyrocketing as the series continues, especially with the clues we get about her towards the end of the book. But hey, if the series can hold my attention like the first book did, I’m not going to complain overly much J Well, frankly, I will complain, but it will be hard to be taken seriously if I read the other two books in this series as quickly as I did the first.

My favorite character in the book was Janco. He was a secondary character, but he’s smart, powerful and has a wicked sense of humor. If he were to exist in this world and ask me to marry him, I would not be averse to the prospect.
In addition to the characters, I thought the plot developed in an interesting way and it was definitely fast-paced. The book reads quickly- I could go through 100 pages an hour, once I got into it. So now, like Blodeudd, I have finished this book and am impatiently waiting for its sequels to arrive! I want to know what happens next. If that isn’t the mark of quality writing, I’m not sure what is.

And the world Snyder creates is great. It’s not fully developed in this book, but there are hints of things to come. This is one of those fantasy books that focuses more on political intrigue and power struggles than on magic and mayhem and epic journeys or wars. I appreciated that, and I think Snyder developed the world very well for what she seems to want to accomplish in it. I’m excited to see where the series leads me.
Musings by Aarti at 1:43 PM