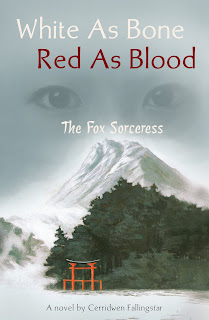 Apologies to everyone who did not win a copy of Terry Pratchett's Unseen Academicals, but please don't worry too much because I have two copies of another book to give away to two lucky BookLust readers (once more only in the US and Canada- sorry, international shipping rates are rough!). I was offered a copy of White as Bone, Red as Blood to review, but I just have far too much on my plate right now to be able to read it. However, I'm not one to deny the pleasure of reading to others, and neither are the people at Carney PR. They have generously offered to give away two copies of the book to readers of BookLust. So if the below book description sounds appealing to you, please leave a comment on this post with your e-mail address and your Far Eastern vacation destination of choice. Again, one extra entry to all followers (just please mention that you're a follower in your comment, please). This contest will be open until noon, October 20th.

Thank you, and good luck!

White as Bone, Red as Blood:
The Fox Sorceress
by Cerridwen Fallingstar

What if we could be immersed in the most pivotal thirty years of Japanese history, previously unknown to western readers, through the eyes of the Empress’ closest confidante and personal sorceress?

White as Bone, Red as Blood: The Fox Sorceress by Cerridwen Fallingstar (Cauldron Productions, September 2009) dissolves the centuries in this twelfth-century tale of sex and secrecy, passion and tumultuous warfare, taking us from love-letters wrapped in silk through a series of brutal battles that shatter the most artistic era in Japan and usher in the age of the samurai.

This story is told by Seiko Fujiwara, poet and sorceress. The aristocratic Fujiwaras were once the nation’s most influential family but now two warrior clans, the Heike and the Genji, battle for control of the throne. Seiko is the daughter of Fujur Fujiwara, priestess of Inari, the deity of abundance and sorcery, and is being trained to follow in her mother’s footsteps as a diviner and healer. Her mother has aligned herself with Lord Kiyomori, leader of the Heike, and is known as his sorceress. When Seiko is eleven, assassins murder her mother and their servants, changing her destiny.

This historical novel chronicles Seiko’s love affairs, palace intrigues, warfare and enchantments over the twenty years it takes for the Genji clan to regain its strength and challenge the Heike to a series of shattering battles whose outcome will forever alter the course of Japanese history.