Review: The Girl with Glass Feet 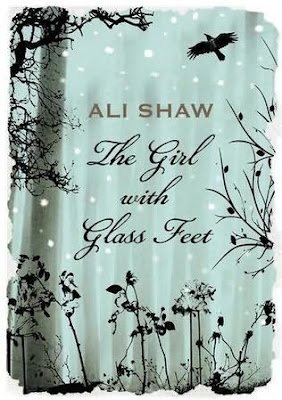 Title: The Girl with Glass Feet

Favorite Line: "I don't think there is being brave, anyway. I used to not tread in puddles in case I fell in them and died like Mummy did. But then in the autumn when it flooded I got stuck and had to splash through one. It didn't feel safer or worser. I just had to splash through it or wait until the sun came up and it all dried out."

Plot Summary:
St. Hauda's is a cold island way up north where narwhal fishing used to be the trade of choice. Once that was banned, most of the population left and the island is now dull, quiet and secluded. This is perfectly fine with Midas Crook, who doesn't like being around too many people and certainly doesn't like touching them. He prefers, instead, to view the world through his camera and make sense of it that way. Ida MacLaird comes to St. Hauda's Land hoping for a cure to her strange illness. Her feet have turned to glass and the illness seems to be spreading up her body. She comes to St. Hauda's looking for Henry Fuwe, a man she met on her last trip there who told her about tiny flying cows, an animal that turns everything it looks at to white, and glass people sunk into bogs. She meets Midas instead, and the two become friends, deepening into something more. The two embark on a mission to save Ida, aided in part by Carl Maulson, who used to be in love with Ida's mother and work with Midas' father. But even as they try to find a cure, the glass in Ida's body keeps creeping up...

This was a beautifully written book. There were so many interlocking stories, all about relationships and love lost and found. Ida and Midas are in the center (I wonder if their names are similar for a reason). Ida wants desperately to connect with someone before her illness leaves her cold, literally. Midas is drawn to Ida, but he must overcome his innate dislike of touching or even really interacting with other people.

Their relationship is central to the plot, but there are so many that are similar to it that reach different conclusions. For example, there is Midas' friend Gustav, who fell madly in love with a woman, and she fell in love with him, too. But before they had spent much time together, she passed away. There is Henry Fuwa, who was in love with a woman, but she was already married and now he thinks it's too late to go after her. Carl Maulsen was in love with Ida's mother, but she wouldn't have him and so now he hopes to help Ida and somehow affect her mother. Elianna, who fell in love with Carl and realized that he would never love her. Midas' father was unfeeling and never cared for his wife or his son; his son now cannot touch anyone and his wife is withering away, at age 50, in a retirement community.

Each relationship presented in the story represents and symbolizes a different version of love, and it's fascinating to see how Shaw weaves the illness of bodies turning to glass into all of it. For an author that is only 27 years old (a year older than me, only!), he writes with a very lyrical touch. I really enjoyed both Ida and Midas as characters. Ida was so strong and faced her problems head-on. Even though she has a seemingly incurable illness, she goes after what she wants and refuses to cater to anyone else. Midas, too, grows so much during the novel, from a shy, socially awkward person always frightened that he will turn out like his father, into a man who stands up for himself and takes risks even when they terrify him.

This book reminded me, atmosphere-wise, of A Winter's Tale. Everything is black and white and cold. It also had the same sort of fantastical elements present- they are there and alluded to, but never really explained. I personally would have preferred a bit more closure around the more minor plot points, but I can see why Shaw left them out. I wish he had also left out just a few instances of characters saying the word, "Um," but I will forgive him that :-)

The Girl with Glass Feet is a slow, sad novel that meanders around on an isolated island. I think you have to be in the right mood for it- I read it curled up inside on a miserable rainy day, and that was the perfect setting. Shaw has a gift for descriptive passages, and he's an author I will follow.
Musings by Aarti at 9:16 AM