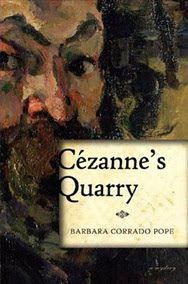 Plot Summary:
In late summer, 1885, a woman's body is found in a quarry near Aix-en-Provence, France. She was raped and murdered. Bernard Martin, a shy new judge in the district, is assigned to the case along with the rough-and-tumble constable in the district, Franc. At first the case seems simple. The woman, Solange Vernet, was probably murdered in a jealous rage by her lover, the English geologist Charles Westerbury. But then they learn that the artist, Cezanne, had a relationship with the woman as well. So maybe it was he who killed her. Underlying the case, and running as a theme throughout the novel, is the French criminal justice system in the late 1900s, the terrifying prospect of being a woman with little means at the turn of the century, and the battle between science and religion.

Barbara Pope Corrado really packs a lot into a pretty quick read. In addition to a murder mystery (or two, or three), she gives readers a primer on French law and the country's difficulties choosing between religion and science. The murder mystery, as usual, takes a backseat for me in relation to the other two aspects of the story. It was interesting, but I didn't feel any particular affinity for any of the main characters in the novel, and so I didn't really care whether anyone was guilty or innocent.

I did, however, find the historical context fascinating. It's so interesting that during the French Revolution, the revolutionaries were so... well, revolutionary, that they tried to completely rid the country of religion. Even going so far as to change the calendar to get rid of Sundays. And yet, one hundred years later, the country has reverted so much that there are National Pilgrimages, in which sick and destitute people travel around France to visit holy sites and pray to get well. It's such a stark and complete change in such a short period of time that you can't help but think that France was one crazy and hectic place for an extended period of time- probably from the Napoleonic wars on through World War I. It must have been an exhausting place to live, never sure whether it was acceptable or not to believe in God or believe in evolution, or whether the people around you believed the same thing.

I also don't know much about the French system of law (except that it is based on the Napoleonic Code), but it seems like it was fairly unjust at the time. And, as usual in history, when laws are lax or unjust, it is often the women who suffer by them. This story certainly highlights that.

As to the characters in the novel- well, to be frank, I could take them or leave them. There were a lot, and as I said in the Sunday Salon, many of them had their points of view expressed. I found the protagonist, Bernard Martin the judge, to be a nice if somewhat dull man. But I don't think he really was dull, I just don't think I learned much more about him by the end of the book than I knew about him at the beginning. As to the rest of the characters- Westerbury, Cezanne, Hortense and Franc- they all annoyed me. Westerbury was a pompous jerk, Cezanne was... well, he was odd. I shall have to do more research on him. Hortense, Cezanne's lover, was whiny and crabby and Franc was a horror. The only character that I would have really liked to get to know more (and who did not have her POV represented) was Clarie, Martin's love interest. Maybe she didn't annoy me because I didn't have access to her head like I did to the other characters'. I think in some ways the multiple points of view worked for the author as we got to see many characters in different lights- Cezanne, for example, is presented as very conflicted, depressed and ultimately run-down man. We would never have gotten so many dimensions on him as a character if not for the multiple points of view. But at the same time, we lost the ability to really bond with a character because it seemed like we were always being held at arms' length.

Overall, I think the book was a good read, and pretty quick considering the hefty themes it covers. I really enjoyed the exposure to an era of French history with which I am unfamiliar, and I hope to see more books by the author that are set in the same period.
Musings by Aarti at 11:11 PM