Review: Don't Call Me a Crook! 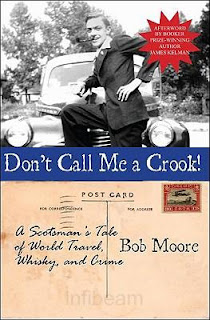 Title: Don't Call Me a Crook: A Scotsman's Tale of World Travel, Whisky, and Crime

Favorite Line: It is a pity there are getting to be so many places that I can never go back to, but all the same, I do not think it is much fun a man being respectable all his life.

Product Description
In your hands is a lost literary treasure and a tribute to one man's triumph over the police, morals, and sobriety.
The 1920s didn't roar for this Glaswegian, they exploded. Sailing around the world seven times as a marine engineer (among other, less honorable vocations), Bob Moore was in the thick of high-society orgies, ship disasters, and pitched battles with bandits on the Yangtze. Cheeky, charming and larcenous, Moore "swiped" (but did not steal) whatever he wanted, drank like a fish, and always kept one step ahead of the law, Prohibition and the women he conned. Clearly, he loved life.
Originally published three-quarters of a century ago, Don't Call Me a Crook! is an overlooked gem. Just a few seem to have known of it. What became of its author after its release is uncertain. Don't Call Me a Crook! is a lost confession of a youth lawlessly lived that will be crowned a classic.

Well, I don't know about this book being "crowned a classic," but it was an enjoyable read. Bob Moore... I don't know if there are any thoroughly unapologetic, charmingly devious con men out there in the world like him any more. The author embodied the spirit of the Roaring 20s, of a world thrilled to be done with WWI and happily ignoring the inevitability of WWII, a world that had not reached the Great Depression, and was riding high on waves of lawlessness and corruption on the cusp of the modern age. He was a thief and a swindler and loved every minute of it. He never saved any money, but spent it all on women and alcohol, and yet he seemed to always end up on his feet. It's hard to admire him, but it's impossible to dislike him. He has a certain roguish, rakish charm.

I really enjoyed the first two parts of this travelogue/memoir, but the third part, which takes place in China, left me a bit cold. It was more repetitive and harder to follow than the other two parts, in my view, and Moore's racism and bigotry shine through a little too much for my liking. For example, he recounts a story of when he drunkenly "swiped" a temple statue that was goodness knows how old from a temple, "just for a joke," and then was shocked when the Chinese villagers got upset. He said the Chinese couldn't take a joke. Maybe that's true, but that complete disrespect for another culture was hard to swallow. However, it made the book very real. I think now, a lot of historical fiction tends to glaze over the racial relations of the past, sidestepping the complications and possible negative reactions that those situations can create. But when you read books that were written in those eras, by people who lived them... well, it's just there. Innate. In the pores, as it were. Yes, it is hard to read, but it's worse to ignore it, and worst to pretend it never happened, I think. Moore had opinions and he stuck by them, regardless of how narrow-minded or slippery his ideas were. I can't help but respect a man who sticks to his guns. And when he does it in such a hilariously self-righteous and interesting manner... well, that just makes the going that much easier.

Don't Call Me a Crook is a fun and interesting look at what life was like for the working class of the 1920s- unapologetic, realistic and true, it sheds light on what must have been a fascinating time to be alive.
Musings by Aarti at 4:38 PM