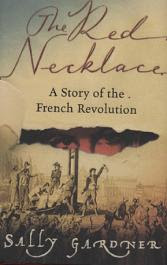 Favorite Line: He had a large, needy, greedy face that gathered itself into a weak, undefined chin and had about it the promise of perpetual disappointment.

From Booklist
*Starred Review* A Gypsy boy, Yann, and the dwarf who has raised him are caught up in drama on and off the stage, where they work with a magician and his automaton. Outside their Parisian theater, revolution is beginning to boil. Inside, the magician is murdered by the villainous Count Kallovski, who has Yann in his sights as well. So begins a finely crafted tale that crosses years and crisscrosses countries, as Yann becomes a young man with a mission: to save the lovely Sido from her heartless father, even as he struggles with the extraordinary gifts bestowed upon him by his Gypsy heritage. If the success of historical fiction depends on how well setting and story mesh, this is a very successful book, indeed. Gardner sweeps readers into a turbulent time, dissecting eighteenth-century French society and the evolution of the revolution, from a yearning for liberty to a chaotic bloodbath. The history becomes personal when seen through the eyes of an astoundingly rich, carefully drawn cast, whose lives are interwoven like pieces of string in an elaborate cat’s cradle. Scores are waiting to be settled on every page; this is a heart-stopper. Grades 9-12. --Ilene Cooper

Honestly, I don't think many other books could be so well-designed to be right up my alley. This book is what I dub "historical fantasy," and it is great! I think the French Revolution is a fascinating (and terrifying) period in history, and it lends itself to novels and fantasy really well. I have often mulled over the thought of starting a reading challenge that centers around the Revolution because it's just such a rich period of history. If I decide to go forward with one, I hope a lot of people choose to read this book. And, wonderfully, there's a sequel coming out later this year- The Silver Blade.

The Red Necklace (I really feel the title The Scarlet Necklace would have been better. Red sounds a bit blase, but that is a minor quibble.) is a really riveting young adult fantasy novel that focuses on a French boy of gypsy origins, Yann, who has magical abilities to move things and read people's minds. It also features a young aristocrat woman (beautiful, of course), Sido, who is trying to escape marriage to a vile, older man who excellently reinvents himself with each change in the political climate of France. The characters are all very richly-drawn and engaging. The story gets a bit bogged down in itself a couple of times, but generally moves at a clipping pace.

I really like the way Sally Gardner set up the story, too- showing different sides of the conflict. The French Revolution was certainly a long time coming, but she shows every side of the bloody mess objectively. Sido is an aristocrat whose servants love and defend her; her father is one who is held up as a symbol of aristocratic gluttony. Their servants are eager and excited by the revolution, but there are others that are horrifyingly taken over by the mob mentality. I also liked the bonus of Yann and his mentor being of gypsy background. It added another nuance to the story without overpowering it. I am excited to see how that backstory develops. There is also a somewhat Star Wars-esque plotline introduced near the end, but I won't get into that one- don't want to ruin the read for anyone else.

All in all, a really fun and interesting read. Highly recommended if you like fantasy or historical fiction. Young adult fantasy is definitely where it's at these days :-)

PS- And how fortuitous that I read and finished this book just in time for Bastille Day!
Musings by Aarti at 12:48 PM