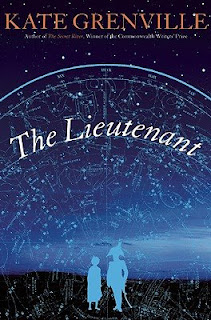 Favorite Line: "But she had shown him the existence of the man he could be."

A stunning follow-up to her Commonwealth Writers’ Prize-winning book, The Secret River, Grenville’s The Lieutenant is a gripping story about friendship, self-discovery, and the power of language set along the unspoiled shores of 1788 New South Wales. As a boy, Daniel Rooke was an outsider. Ridiculed in school and misunderstood by his parents, Daniel could only hope that he would one day find his place in life. When he joins the marines and travels to Australia as a lieutenant on the First Fleet, Daniel finally sees his chance for a new beginning. As his countrymen struggle to control their cargo of convicts and communicate with nearby Aboriginal tribes, Daniel constructs an observatory to chart the stars and begin the work he prays will make him famous. But the place where they have landed will prove far more revelatory than the night sky. Out on his isolated point, Daniel comes to intimately know the local Aborigines and forges a remarkable connection with one girl that will change the course of his life. The Lieutenant is a remarkable story about the poignancy of a friendship that defies linguistic and cultural barriers, and shows one man that he is capable of exceptional courage.

I think I have gone on and on about my love of Kate Grenville's The Secret River several times before. It is one of my all-time favorite books, not only for the plot and the characters, but for Grenville's complete mastery over the English language. She knows how to wield it and wind it and make it magical. Part of the excitement of opening a new book, for me, is in the hopes of discovering an author like Grenville, who can take my breath away with her writing.

The Lieutenant centers around the same theme as The Secret River- the colonization of Australia by the British, and the subsequent race relations between the British and the natives, the struggles of conscience many people faced. She approaches this topic, always, in a manner that manages to be sympathetic to both sides. I think this is probably a very hard line to walk, so she is deserving of praise for it. Her language in this book is just as remarkable as it is in The Secret River- she uses such simple words, really, but she uses them so well. I don't know how she does it, but I wish that I could.

Somehow, though, this story did not have the same magic for me that The Secret River did. I did not feel as emotionally invested in the characters. That's not to say that Daniel Rooke is not a commendable and admirable person, or that he wasn't fleshed out enough. He was- there was just something slightly flat about him to me. And I don't think I ever got to know any of the other characters well enough to warm to them, though I certainly had strong feelings about several of them. The spark, though, did not ignite into a flame.

This book is actually shorter than it seems- I read it pretty quickly, and I don't think I was rushing at all to finish it. I think Grenville spends more time on Rooke's life before he reaches Australia, and so the time he is in Australia seems truncated in comparison. And the way she ends the book is bewildering to me- I don't think we know enough of the man throughout the rest of the story to be able to make the leap she does at the end of it. Rooke disappointed me as a character after the complexity of William Thornhill in The Secret River. I think she could have developed him more and made the story a bit longer to give readers a better read on him.

I did enjoy reading this book, and I would recommend it to anyone interested in Australian history and race relations. But I would much, much more highly recommend The Secret River. It is fantastic.