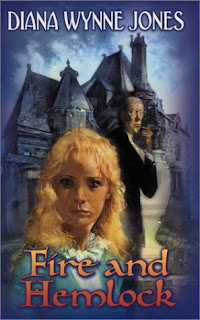 Favorite Line: Bright, sharp streaks of sound, Polly thought. If you were able to hear lime juice, it would sound like violins.

Product Description
In the mind of a lonely, imaginative girl, who can tell where fiction ends and reality begins? An epic fantasy, spanning nine years...The fire and hemlock photograph above Polly's bed sparks memories in her that don't seem to exist any more. Halloween; nine years ago; she gatecrashed a funeral party at the big house and met Thomas Lynn for the first time. Despite the fact that he's an adult, they struck up an immediate friendship, and began making up stories together -- stories in which Tom is a great hero, and Polly is his assistant. The trouble is, these scary adventures have a nasty habit of coming true...But what has happened in the years between? Why has Tom been erased from Polly's mind, and from the rest of the world as well? Gradually Polly uncovers the awful truth and, at Halloween nine years on, realizes that Tom's soul is forfeit to demonic powers unless she can save him.

I have only read one other book by Diana Wynne Jones, Howl's Moving Castle, and I loved it. Ironically, at the end of that review (written in October 2006!), I say that I will snatch up the sequel, Castle in the Air. Almost three years later, and that snatching has not occurred. I don't know why, but I seem not to read sequels right after one another, unless in a huge passionate burst a la Dorothy Dunnett or George R. R. Martin.

Anyway, since I adored the one book I'd ever read by Wynne Jones, I've always been compelled to pick up any others when I feel they are to be had at a bargain, with the result of me getting quite a few books on my shelves purchased with no idea of the plot, only on the strength of the author. Fire and Hemlock is one of those.

The book is based on the Scottish myths of Thomas the Rhymer and Tam Lin. I am not very familiar with these stories (what is with the Brits and fairies?!), and I think that definitely worked against me here. Generally, they deal with men being sacrified to fairy queens, and the one or two that were able to make a break and get away.

I will freely admit that I have absolutely no idea what happened at the end of the book. I read it, and could feel myself sinking quickly, and then all of a sudden the book was done (please don't ask me to summarize how it ended) and my hopes of everything making sense in the last sentence were dashed. I think it will require a re-read for me to make sense of the conclusion. Or, to be honest, the entire last quarter of the book. Happily, however, most other readers seem to be in the dark as to the end, too, so I suppose I am in good company.

In any case, the story is certainly interesting and hits on several different levels and themes, even if I may have missed The Big Picture. The characters are all very vivid and realistic, the plot moves quickly, and there are numerous allusions to quite a few books that will now go on my wish list. It is also very real for a fantasy book, including many painful scenes of Polly's broken home. The entire romance aspect of the plot disturbs me a bit as well. I feel certain there must be a reason Wynne Jones wrote it as she did and I have a feeling it has to do with The Big Picture which I so woefully lost track of at the end of the book. However, be that as it may... at this point in my reaction to the novel, the whole 10-year-old girl, middle-aged man thing just doesn't sit well.

I do think the plot gets very wrapped up in itself and becomes a bit overly complicated for young adults. Or maybe it's fine for young adults and just totally over my head, I don't know. I think Wynne Jones tried very hard to keep her story as true to the original as she could, but all that served to do was to make a fairly simple story into a mind-bender. That said, I really love the author's way with words. She uses simple words in really wonderful ways (see quote above) and it's a delight to read them. I would say, though, to read Howl's Moving Castle if you want a fun, more heart-warming read, and keep this one on the shelf until you want to dig yourself really deep into mythology and gender wars!

Also, if anyone can recommend a version of Tam Lin for me to pick up and read, I would greatly appreciate it!

I am taking an exam on Saturday, but I hope to post the first of Rosie's Riveters soon! Thank you to everyone who commented and who contacted me privately with interest in participating- I think it's going to be a lot of fun :-)
Musings by Aarti at 9:49 PM