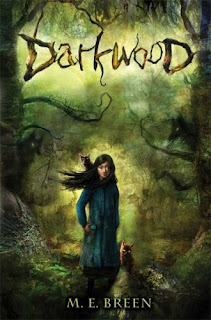 This review is based on an advance readers' copy.

Darkness falls so quickly in Howland that the people there have no word for evening. One minute the sky is light, the next minute it is black. But darkness comes in other forms, too, and for thirteen-year-old Annie, the misery she endures in her Uncle’s household makes the black of night seem almost soothing. When Annie escapes, her route takes her first to a dangerous mine where a precious stone is being stolen by an enemy of the king, and later to the king’s own halls, where a figure from Annie’s past makes a startling appearance. All the while, reported sightings of kinderstalk— mysterious, wolf-like creatures that prowl Howland’s dark forests—grow more frequent. Eloquent, suspenseful, and imbued with fairy-tale motifs found in The Brothers Grimm, this is a riveting coming-of-age story of a girl who must learn to trust her instincts if she’s to lead the people she is destined to rule.

This book seemed right up my alley when I requested it through Amazon Vine- it is fantasy for young adults (and really- who would disagree that children's & young adult fantasy is not where it's at, these days?), involves a girl overcoming obstacles and has been compared to fairy tales by the Brothers Grimm. It also has very nice cover art. However, as sometimes happens in life, all these separate, excellent elements did not come together to make a great story.

Darkwood is the first in a series. It does not say this anywhere on the cover or in the book, so I went into the book thinking it was a stand-alone. You can imagine my annoyance when I got to the end- a cliffhanger, of course- and none of the storylines had really been resolved. I think the author tried to put far too many elements of the story into too small a book. It weighs in at less than 300, large-texted pages, and yet involves countless characters, seemingly random (and pointless?) plot twists and all sorts of other confusing things. The shifts in scenes were often jarring and had no sort of transition. All in all, I found it very muddled.

That said, I feel like some of my annoyances could be ironed out in future novels. This is Breen's first novel, and it's the first in a series, so it's possible that my utter bewilderment with some plot elements is temporary and all will become clear in future books. There are some characters- the king and his fiancee, and the loveable sisters Beatrice and Serena, in particular- that I would love to see develop and come into their own.

I don't know, though, that I feel vested enough in the series to continue. This isn't an author I am going to watch, and it isn't a series for which I will eagerly anticipate the next book. Personally, I think that if you are a fan of young adult dark fantasy (and it's pretty dark for its age group), then there are many other series out there that you could read instead for better enjoyment.