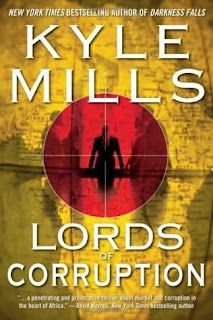 Favorite Line: "I love Americans. You're always thinking of something new and better. I just wonder when you're going to stop and enjoy those things you dream up."

From Publishers Weekly
In this lackluster suspense novel from bestseller Mills (Darkness Falls), ex-con Josh Hagarty, who's just earned an M.B.A., but fears his tainted past is a liability, leaps at a job offer from NewAfrica, a charitable organization that operates in Africa, despite his ignorance of the continent. Shortly after his arrival in an unnamed country devastated by civil strife, Hagarty learns his new employer concealed the truth about his predecessor's death. More disturbing revelations quickly follow that place him at odds with NewAfrica and put his life at risk. Assisted by two of the oldest clichés in the genre—the cynical journalist who sees his efforts as a chance for redemption and the attractive, selfless aid worker—Hagarty fights to expose the truth about his employer and the corrupt rulers of the country where he's been assigned. Some readers will groan at the plot contrivances that enable Hagarty to get out of a tight spot.

I am generally not a fan of thrillers. I didn't particularly care for The Da Vinci Code and I can't even really think of any other ones that I've read off the top of my head. I think the pace can sometimes be too quick for me. Nonetheless, this one sounded interesting, what with Africa and corruption and charity organizations. So I thought it would be good to review.

And I think for a thriller, it's definitely a good book. I don't mean that in a negative way, as though thrillers are a step down on the literary ladder for me. I mean I think it's good, for a genre of book with which I don't have much familiarity. So, just as I did with Live Nude Girl, another genre I don't have much familiarity with, I will refrain from giving this book a rating.

I would agree with Publishers Weekly above- that there are some plot contrivances that seem quite convenient for the author and the main character. I also have trouble with a character who, when she is told that someone's sister is possibly in danger, thinks that the correct response is seduction. Really? A bit callous.

But the overwhelming tone of this book was bleak. It takes place in an unnamed African country, rife with corruption and peopled by underage kids with machine guns. It ends with a large number of characters- major and minor- dead, and doesn't really resolve much at all about the larger issues presented. The most interesting and frightening position presented in the book was that foreign aid to Africa does not help the Africans, but instead helps the foreigners and any corrupt leader in those countries. This is a point that has been brought up before in many circles and publications, but hasn't really been responded to adequately. Goodness knows, it's far too complicated an issue to solve, and a fictional account of a ficitional country is probably not the right venue for discussion. All the same- it would have been interesting for the story to delve more into that. However, there were so many other depressing issues it hit on, that I suppose one less didn't hurt too much.

The story moves quickly and is very easy to follow along- I finished the book quite easily within two days. The characters do not have much time to develop, except for a couple of the main ones, and so there isn't much on that front. But the story premise is interesting. And it certainly gives one a lot to mull over concerning aid workers and the good they do.
Musings by Aarti at 12:11 AM