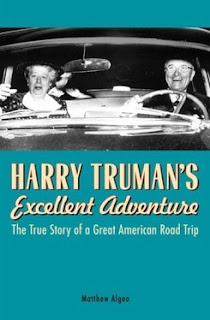 Product Description
On June 19, 1953, Harry Truman got up early, packed the trunk of his Chrysler New Yorker, and did something no other former president has done before or since: he hit the road. No Secret Service protection. No traveling press. Just Harry and his childhood sweetheart Bess, off to visit old friends, take in a Broadway play, celebrate their wedding anniversary in the Big Apple, and blow a bit of the money he’d just received to write his memoirs. Hopefully incognito.

In this lively history, author Matthew Algeo meticulously details how Truman’s plan to blend in went wonderfully awry. Fellow diners, bellhops, cabbies, squealing teenagers at a Future Homemakers of America convention, and one very by-the-book Pennsylvania state trooper--all unknowingly conspired to blow his cover. Algeo revisits the Trumans’ route, staying at the same hotels and eating at the same diners, and takes readers on brief detours into topics such as the postwar American auto industry, McCarthyism, the nation’s highway system, and the decline of Main Street America. By the end of the 2,500-mile journey, you will have a new and heartfelt appreciation for America’s last citizen-president.

I have always been far more interested in European history than American history, and I've also pretty much ignored most modern history- anything post-WWI seems to bore me. But a great deal has happened in the past few generations, and life has changed exponentially (or, it would, if life could be measured in exponents). So reading about the 1950s- well, it's a bit jolting just how different life was at the time.

In reading this book, I spent some time puzzling over why the author wrote it. Does he just really like Harry Truman? Did he want to take a road trip? Does he love 1950s America? I am not sure. Also, I am not sure if Algeo really accomplished his goal through this book. He follows Truman's route through the Midwest and the East Coast, meticulously finding people who had interacted with the former president, staying in the same places, eating the same foods... but why? I think the book would be well-served by an introduction, explaining its purpose. I can't imagine someone waking up in the morning and saying, "I want to take a road trip, Harry Truman-style." But maybe this happens more than I know.

Whatever the case may be, the book is fun and interesting. It reads, for the most part, like a travel journal. The author talks about odd and interesting people he meets (and makes asides about them just like this), and shares anecdotes and facts about corollary events in American history that helped shape the nation. It's a great book because you get to know the author's personality really well (he seems to abhor Holiday Inn). But you also get to know Harry Truman. And that's the most fascinating part.

How much do people really know about their leaders' personalities? The world adores Barack and Family, but not many people can claim to know them intimately. It's one thing to base your perception of a sports star around his actions and the hype surrounding him, but what happens when it's the President? And just because someone's a great president or leader, that doesn't make him a great guy. And vice versa. George W. Bush is a good example of this. Not many people think he was a good leader at all, but most everyone agrees that he seems to be a pretty nice guy.

And maybe that's the sad part, for towering historical figures. They are remembered based almost completely on perception and reputation, generation after generation. Herbert Hoover is often vilified as being ineffective during the Great Depression. But, according to this book, he was a great humanitarian and worked tirelessly to fight global hunger. No one seems to know that. Most people know him because of a vacuum cleaner and a dam. Harry Truman is known for being president after FDR. For dropping the atomic bomb. Twice. For his whistle-stop tour. For that famous picture of him holding the Chicago Tribune. But this book shows him after all that- after he's left office and attempted to resume a normal life with his wife. It shares a much more intimate view of the President, and that was fun to see.
Musings by Aarti at 11:01 PM