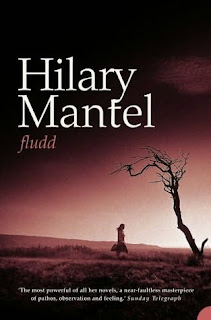 Favorite Line: But there was a whisper at the back of her mind, and only he could have put it there: I have come to transform you, transformation is my business.

From Publishers Weekly
Originally published in 1989 in the U.K., Mantel's slim, intense novel displays the author's formidable gift for illuminating the darker side of the human heart, offering metaphoric and literal incarnations of the powerful central images of Catholicism. Her circa-1956 setting of Fetherhoughton, a provincial English village surrounded on three sides by gloomy moors, is stark and dreary, a dead end where unwanted people are unceremoniously dumped. Such is the case of Sister Philomena, a sturdy farm girl-turned-nun banished from an Irish convent because her sister Kathleen breaks convent rules. It becomes apparent that Philomena will not fit in anywhere, as she is a strange mix of innocence and knowledge, a sage romantic. Philomena finds an unlikely confidant in Father Angwin, the parish priest, who has lost his faith, thinks the town tobacconist is the devil and fears the threat of a youthful replacement for his post. When a rain-soaked man named Fludd arrives on a stormy night, Angwin assumes it is the newly appointed curate, but even so, the two become close friends and, in time, Angwin sheds his bitterness and paranoia to become a more compassionate, wiser person. Fludd sweeps the nosy housekeeper, Agnes, off her feet with his gentlemanly manners and cool confidence, but Philomena is also strangely attracted to the devilish Fludd, who magically transforms everyone he meets. The monstrous Mother Perpetua, headmistress of the St. Thomas Aquinas School, is the lone exception, and she ends up being a key player in the rural face-off between good and evil. Hawthornden Prize-winner Mantel (The Giant, O'Brien) uses her knack for dry wit and lovely, scene-setting detail to liven up crisp, utilitarian prose, revealing, as her characters do, the ever-surprising divine in the mundane. (June)
Copyright 2000 Reed Business Information, Inc.

Well, I admit to not really knowing what I think about this book. It is one of those to mull over for an extended period of time in the back of your mind, the way you would allow a sip of wine to rest on your tongue in order to understand its complexity.

I have just returned from a wonderful trip to California and Sonoma Valley, so wine is on my mind :-)

So is Hilary Mantel's Fludd, though. I have only read one other book by Mantel, A Place of Greater Safety (which I reviewed on my old blog here). I loved that book and would highly recommend it to anyone with an interest in the French Revolution, though it is certainly a door-stopper. Fludd, on the other hand, is a very slim volume that could probably be read in a day. Understanding it fully, however, probably takes much longer than it took me to read A Place of Greater Safety.

Do you ever get that feeling when reading a book that you're a part of something special and very important, but you aren't entirely sure that you can grasp the entirety of what the author is presenting to you? That is the feeling I had with Fludd. It didn't seem as though there was much plot to the book until the very end, and then all at once I was finished and was left feeling as though I had read everything closely but had somehow missed The Big Picture.

The book is about religion and faith and the positive and negative effects the two can have on people. But there is so much more to it. Symbolism, I might say, up the wazoo. There are statues and nuns and obscure questions of faith ("If one uses dripping to cook on a Friday during Lent, is that considered eating meat?"). A never-ending carafe of whiskey. A priest who claims disbelief in God to Fludd, but who then says that the devil lives in Netherhoughton. (Can you believe in the devil but not in God? Is that not depressing?) And then, the biggest enigma of them all, there is Fludd.

He arrives and miracles happen. No one can really describe what his face looks like. He appears to finish the food on his plate, but no one ever sees him put food in his mouth. He doesn't seem to do much of anything, but he comes and he goes and things are different. His name, at the least, suggests a great deal about him.

I realize that I haven't so much reviewed this book as made oblique references to how much it has remained in my mind after I finished reading it. Isn't that a stellar review in and of itself? I should think most authors want readers to continue chewing over their stories after reading the last word. I am still chewing (much as Fludd spent much of the book chewing without seeming to eat anything). But I think I know enough about my reaction to recommend the book- it is a misleading slim volume, but it will stay with you after you're done. Which is good, because then we can discuss it!
Musings by Aarti at 6:01 PM