Review: The Book of the Unknown - Tales of the Thirty-Six 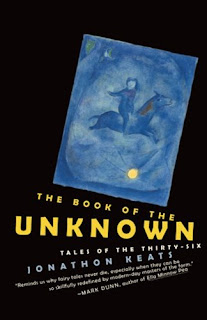 Title: The Book of the Unknown: Tales of the Thirty-six

From Publishers Weekly
Keats (The Pathology of Lies) re-imagines Jewish folklore in his collection of stories about the Talmudic idea of the Lamedh-Vov, 36 righteous souls who must exist at all times in order for humanity, and the world, to sustain itself. A fictional author's foreword by Jay Katz, Ph.D., summarizes the idea of the Lamedh-Vov and establishes its legitimacy by citing a list of names Katz found while excavating a German synagogue. The stories that follow—covering 12 of the 36 souls—are based on Katz's discussions with villagers. The heroes of these stories include a liar, a thief, an idiot and a whore—not your typical folk heroes. Gimmel the Gambler, for example, loses his fortune to a beautiful peasant woman with one roll of the dice; with her new riches, she's able to marry the king. The accomplishment of this book is more about stylistic mimicry than originality; Keats's ear for the language of folktales comes through nicely, though because of the stories' limited scope, they lack bite.

Jonathan Keats' collection made me realize, for the first time, that maybe I do enjoy short stories. I never really did before, but this book, coupled with In Other Rooms, Other Wonders, really impressed me. I have always been under the impression that I don't like short stories, mainly because I feel that the plot develops at the expense of character development. However, most of the stories in both The Book of the Unknown and In Other Rooms, Other Wonders were character-driven, not plot.

The Book of the Unknown reads very quickly and smoothly, though it is not light reading. Each story presented has a definite lesson- not in a quasi-Judaic morality tale way, but in a "You would enjoy your life more if you were more like this person" sort of way. I did not feel that the book was especially religious, so I hope its description of being based on Jewish folklore does not turn people away from it. I am neither Jewish nor religious, and I really enjoyed the book. My personal favorite story was about a golem who becomes a princess, and then watches as her husband loses interest and begins going after many other women in the palace. Instead of being vindictive or bitter, she spends her time doing other tasks that make her world better.

And maybe that's why I really enjoyed the book- all the stories were uplifting and happy, not the dire moralistic tales that you might expect. Many of them are more fairy tale-like than anything else. Publishers Weekly may say above that the stories "lack bite," but for a bedtime treat before allowing your dreams to take over, they are excellent. And surprisingly not as straight-forward as one might think- some of them, I was still mulling over the next morning.

The book begins with a preface from the "collector" of the stories and ends with a note from the editors that makes it clear that sequels could very much be in the picture (after all- we only heard tales from twelve of the thirty-six). I hope there is because the stories themselves are vastly entertaining, and the afterword makes me think that an over-arcing plot would be fascinating to read about as well.