Review: Sin in the Second City 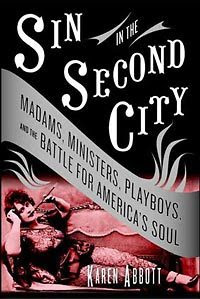 Title: Sin in the Second City

# of Pages: 297 (not including bibliography or appendix)

From Publishers Weekly
Freelance journalist Abbott's vibrant first book probes the titillating milieu of the posh, world-famous Everleigh Club brothel that operated from 1900 to 1911 on Chicago's Near South Side. The madams, Ada and Minna Everleigh, were sisters whose shifting identities had them as traveling actors, Edgar Allan Poe's relatives, Kentucky debutantes fleeing violent husbands and daughters of a once-wealthy Virginia lawyer crushed by the Civil War. While lesser whorehouses specialized in deflowering virgins, beatings and bondage, the Everleighs spoiled their whores with couture gowns, gourmet meals and extraordinary salaries. The bordello—which boasted three stringed orchestras and a room of 1,000 mirrors—attracted such patrons as Theodore Dreiser, John Barrymore and Prussian Prince Henry. But the successful cathouse was implicated in the 1905 shooting of department store heir Marshall Field Jr. and inevitably became the target of rivals and reformers alike. Madam Vic Shaw tried to frame the Everleighs for a millionaire playboy's drug overdose, Rev. Ernest Bell preached nightly outside the club and ambitious Chicago state's attorney Clifford Roe built his career on the promise of obliterating white slavery. With colorful characters, this is an entertaining, well-researched slice of Windy City history. Photos.

One of the defining characteristics for a person born and bred in Chicago, IL, is a fierce and complete pride in the city. I don't know how many people all over the country or the world read the book The Devil in the White City, but that book is everywhere in the Windy City, read by commuters on buses and trains and displayed on everyone's bookshelves. With Illinois once again in the political spotlight, between Obama and Blagojevich, reading Sin in the Second City makes one realize that the more things change, the more things stay the same. Chicago's political machine, full of corruption, is working in much the same way it did when it was still a young city.

I enjoyed Abbott's book. Proud as I am of Chicago, I don't know much at all about its past. It was fascinating to read about the "red-light district," and about all the prominent citizens that spent so much time there. It's amazing the sorts of things that went on at the turn of the century that one would never consider even feasible today. And while the red-light district was full of disease and depression and drugs and all sorts of miserable things, it also seems to symbolize what a rowdy and alive place the city was at the time, and just how passionate people were about their beliefs. The book gave enough information to be interesting, but didn't get bogged down with all the smaller details or massive character sketches. This is popular history, not a book one would use for in-depth research into what was commonly referred to as "the white slave trade."

However, I think the book also had definite flaws. For example, some of it read more like a novel than a historical account. Abbott attributes thoughts and movements to all her characters, but mostly to Minna Everleigh, that she can't possibly have documented proof for. How can one really know whether someone's "heart pounded" or "hand fluttered over a letter," etc.? Granted, it wasn't like Abbott was making huge leaps with her facts or anything, but I think with historical non-fiction, doing anything like that makes your entire book and premise seem possibly faulty. Best to stick only with what you know.

Additionally, there were some holes that I wish had been cleared up, mostly regarding Mona Marshall. Mona was the first real "white slave" to give testimony and gain national attention about the practice of young girls being tricked and sold into prostitution. Abbott says many times in the book that Mona's story was inconsistent from one telling to another and that even her lawyer wasn't sure whether to believe her or not- but we never get any detail as to why, or as to what actually happened to her. This is annoying, to say the least.

Overall, though, the book is entertaining and pretty quick reading. It is the sort of book that piques one's interest in a subject and may cause you to look for other, more detailed books, to delve deeper into the subject. It's not one that gives the full picture, but it will certainly whet your appetite.
Musings by Aarti at 2:16 PM