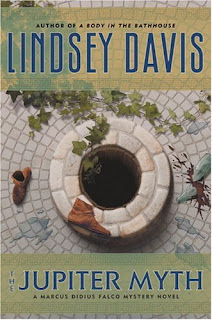 Favorite Line: Chloris had been destroyed, yet it was on her own ground, using her skills, defiant, admired, and, I thought, holding no regrets.
Who could say that was uncivilized?

From Publishers Weekly Davis's 14th clever, witty adventure (after 2001's A Body in the Bathhouse) starring the suave Marcus Didius Falco, from Ancient Rome, finds the informer/investigator plying his talents on the mean and muddy streets of Londinium, Britannia, in A.D. 75. In fact, almost everything about the growing community is mean, from its dark and dingy bars to the sprawling wharves and warehouses. The discovery of a body jammed headfirst into a bar's well is enough to get Falco sent to the scene as an expert on unnatural death. Falco needs all his celebrated intelligence to survive the ensuing problems. Davis skillfully braids references to Britain's future into her story of its past without ever diminishing the thrust of Falco's adventures. And what adventures! The murder victim is a disgraced henchman of King Togidubnus, an important ally of Rome. Solving and avenging the death quickly is important to placate the king. Civil order is in disrepair, while the rapidly growing city is ripe pickings for the ambitious gangsters moving in from Rome, whom Falco and his friend Petronius, have battled before. An entourage that includes wife Helena, their two small children, his sister, Maia, and her four children gives Falco questionable help. This thoroughly entertaining addition can only burnish the luster of this fine series.

The Jupiter Myth is the fourteenth offering in Lindsey Davis' Marcus Didius Falco mystery series- a series that has quickly won a place of honor on my shelves. However, a long mystery series faces the battle of trying to keep the plots interesting and fresh while developing the characters and their nuances.

In my opinion, The Jupiter Myth is not the best Davis has to offer. It moves slowly and is really very depressing. A lot of horrible situations- death, rape, murder, mistrust- arise in this one, and they're a little difficult to handle.

In fact, the murder seems to be almost a side note to everything else that is going on in the story. Not that one can really blame Falco- between his moody sister Maia, his disappearing best friend Petro, his former flame Chloris, his jealous wife Helena, and the creeping knowledge of gangs taking over Londinium, the poor guy has a lot on his plate.

And perhaps it was because there was so much going on, plot-wise, that I felt the characters were a little washed-up and rang a little untrue in this story. Helena and Falco, who have always been so sure of each other, seem to have a period of "what if?" in their comfortable lives together. This is probably natural in most relationships when an old flame arrives in town, but it seemed a little forced to me in this one.

Also, Falco's sister Maia (not surprising to anyone, I'm sure) gets on my nerves. I don't know why, but she seems to always barge in and say stupid things. Apparently, this makes her dazzling and enticing to men. Go figure. Of course, I've said my fair share of stupid things in any number of situations- but Maia is so brash and angry all the time that I would far prefer her to stay out of the stories. Unfortunately, that seems unlikely to happen. I really don't like the romantic development that takes place in this book between Maia and another character (one that I really like), but it also seems like that is a relationship which will last forever. Sigh.

In any case, a lukewarm Falco book is better than none, and I think Davis' series is great fun- this book is full of the same wry, self-deprecating humor that Falco is famed for, and it often made me smile.
Musings by Aarti at 10:05 PM