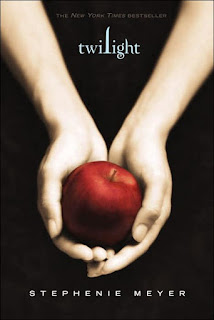 Favorite Quote: When life offers you a dream so far beyond any of your expectations, it's not reasonable to grieve when it comes to an end.

From School Library Journal
Starred Review. Grade 9 Up–Headstrong, sun-loving, 17-year-old Bella declines her mom's invitation to move to Florida, and instead reluctantly opts to move to her dad's cabin in the dreary, rainy town of Forks, WA. She becomes intrigued with Edward Cullen, a distant, stylish, and disarmingly handsome senior, who is also a vampire. When he reveals that his specific clan hunts wildlife instead of humans, Bella deduces that she is safe from his blood-sucking instincts and therefore free to fall hopelessly in love with him. The feeling is mutual, and the resulting volatile romance smolders as they attempt to hide Edward's identity from her family and the rest of the school. Meyer adds an eerie new twist to the mismatched, star-crossed lovers theme: predator falls for prey, human falls for vampire. This tension strips away any pretense readers may have about the everyday teen romance novel, and kissing, touching, and talking take on an entirely new meaning when one small mistake could be life-threatening. Bella and Edward's struggle to make their relationship work becomes a struggle for survival, especially when vampires from an outside clan infiltrate the Cullen territory and head straight for her. As a result, the novel's danger-factor skyrockets as the excitement of secret love and hushed affection morphs into a terrifying race to stay alive. Realistic, subtle, succinct, and easy to follow, Twilight will have readers dying to sink their teeth into it.–Hillias J. Martin, New York Public Library

So, really, I should have known before even starting this book that it wasn't for me. I'm not the sort of girl who enjoys teenage romance, especially the type with a supernatural bent to it. But SO MANY PEOPLE rave about this book (and the two that follow it. I believe a fourth one is due soon, as well.), and I felt like I should give it a chance.

But in my opinion, it was a pretty painful read at times. And also cause for a great deal of eye-rolling.

I don't think I'm really that cynical a person- I enjoy a good romantic comedy (The Cutting Edge, anyone?), and don't dislike romance in books, for the most part.

What I dislike is drama. Unnecessary, overwrought and ridiculous drama. And, when you have a book about a high school girl who falls in love with a vampire, the drama is just in overabundance.

17-year-old Bella is from Phoenix- apparently, she was socially awkward there (one doesn't know why, except that perhaps she was too clumsy) and didn't have many friends. However, she moves to Forks and everyone thinks she's gorgeous, including a very sexy and good-at-everything vampire named Edward. Clearly, she was not nearly as socially awkward or average-looking as she believed. Instead, she was gorgeous and it just took moving to Washington state to realize it.

This premise in general annoys me- the one of a girl who believes herself to be average-looking, only to be told (over and over and over again, in this particular book!) by a very attractive man that she is undeniably beautiful and perfect.

I dislike it even more, though, when the awkward-but-gorgeous girl then hooks up with the very attractive man (in this case, a vampire) and they declare their undying love for each other about ten minutes after their first conversation, and then the rest of the book is just drama about them being together and escaping from a different vampire who wants to suck her blood.

I am in the vast minority of people who didn't fall immediately in love with this book. On Amazon, 957 of 1,151 gave it 5/5 stars. I am giving it 5/10. I recognize that my rating is not in line with most people's. But... I just can't see what all the fuss is about, personally. There was just far too much teenage angst for me, coupled with the inevitable drama that surrounds the fantasy genre. Putting the two together took me over my limit.

The book was entertaining, certainly- as my friend who suggested the read told me, it's hard to put down. You always want to read the next chapter. But after a while, you realize that the next chapter is pretty much exactly the same as the one before it! Edward the vampire comes within three feet of Bella, and she starts hyperventilating. He kisses her, and the girl faints. He touches her and she tingles. And she just can't get over how gorgeous he is. And that he wants her.

Optimistically, my friend gave me book two (New Moon) of the series tonight at dinner, though she said she can see why I might not read it. I don't know yet. She assures me it is better than the first one in some ways because Bella and Edward are not together, for the most part, and so Bella can't faint away or have a heart attack every third line. This seems more promising. But I am not sure if that is reason enough to continue with the series when I could settle in for some time with the practical and beloved Helena in the Falco series. We'll have to see :-) Bella Swan, though, is certainly not making it to the list on the right side of this page!