Review: How I Live Now 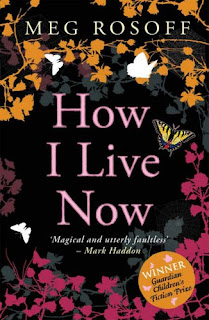 Favorite Line: Every war has turning points and every person, too.

From Publisher's Weekly
This riveting first novel paints a frighteningly realistic picture of a world war breaking out in the 21st century. Told from the point of view of 15-year-old Manhattan native Daisy, the novel follows her arrival and her stay with cousins on a remote farm in England. Soon after Daisy settles into their farmhouse, her Aunt Penn becomes stranded in Oslo and terrorists invade and occupy England. Daisy's candid, intelligent narrative draws readers into her very private world, which appears almost utopian at first with no adult supervision (especially by contrast with her home life with her widowed father and his new wife). The heroine finds herself falling in love with cousin Edmond, and the author credibly creates a world in which social taboos are temporarily erased. When soldiers usurp the farm, they send the girls off separately from the boys, and Daisy becomes determined to keep herself and her youngest cousin, Piper, alive. Like the ripple effects of paranoia and panic in society, the changes within Daisy do not occur all at once, but they have dramatic effects. In the span of a few months, she goes from a self-centered, disgruntled teen to a courageous survivor motivated by love and compassion. How she comes to understand the effects the war has had on others provides the greatest evidence of her growth, as well as her motivation to get through to those who seem lost to war's consequences. Teens may feel that they have experienced a war themselves as they vicariously witness Daisy's worst nightmares. Like the heroine, readers will emerge from the rubble much shaken, a little wiser and with perhaps a greater sense of humanity.

I own a paperback copy of this book. However, I saw the audiobook version in the library, considered seriously for a moment the chances that I'd actually read the book any time soon, and then picked it up. And it's a treat :-) The reader, Kim Mai Guest, perfectly hits the tone of precocious, sarcastic teenage princess. And the dry tone is really very affecting when you transpose it onto a country under occupation. There were times when I was really tearing up in my car. The book is written in a very dry, self-deprecating style, and then out of nowhere will come this very deep, moving scene and the narrator (Daisy's) simply beautiful thoughts on it. It's amazingly well-written. It's impossible not to care about the characters, though most of them seem more surreal than real. Actually, a lot of the book seems surreal- like a dream that, when you wake up, you're not sure if you remember what it was about but you remember certain parts of it very vividly. Months from now, I might not remember exactly what it is about this book I enjoyed so much, but I think I'll remember that it was interspersed with those seemingly random, beautiful sentences. I can't even pick some out to share with you all because I experienced it as an audiobook, and didn't write down any quotes that stuck out. But experience it I did.

That's not to say there weren't some points that annoyed me. For example, Daisy's father and her stepmother are not in the story at all, but they seem almost bizarrely evil for no real reason at all. The first half of the book seems barely to touch on the war, and then out of nowhere it rears up in the second half to something of pretty gigantic proportions, though we don't get any real indication as to why- maybe because Daisy doesn't care about the details? But this does lend itself to putting the reader in the bewildering position that most of the war civilians must have dealt with. And the climax of the novel, in my opinion, was hazy at best.

But the characters are amazing. Particularly Piper, I thought, and Daisy herself- who shines as a New York City teenager taken way out of her comfort zone but who manages to keep her humor and sense of perspective throughout.

Overall, a very enjoyable and very moving portrait of a country under siege and the toll it takes on people, and the desperate ways they cling to hope.
Musings by Aarti at 7:57 PM