Review: The Book of Saladin 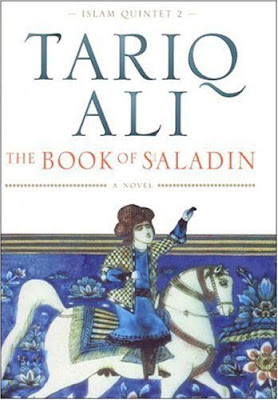 Favorite Quote: There were many, but this one was very pretty, in my opinion. "O Commander of the Victorious, listening to the sermon the heavens wept tears of joy and the stars abandoned their positions in the firmament not to shoot on the wicked, but to celebrate together."

From Publishers Weekly
A very different novel from Fear of Mirrors reviewed above, Ali's earthy, lusty saga about the fall of Jerusalem to Muslim forces in 1187 rewrites Eurocentric history by focusing on the historical figure Salah al-Din (better known as Saladin), the Kurdish upstart who used his position as sultan of Egypt and Syria to retake the Holy City from Crusaders. Through Saladin's confidences told to a fictive character- Isaac ibn Yahub, his Jewish scribe, who narrates the story- we not only learn of the sultan's marital woes (his favorite wife is having a lesbian affair with another concubine), we also view the Crusades from a non-Christian point of view. In this fiercely lyrical second installment of a projected tetralogy (following Shadows of the Pomegranate Tree), Ali exposes deep wounds between Christian, Muslim and Jewish civilizations that have yet to heal. A digressive arabesque weaving tales of political intrigue, gay and straight love, betrayal, cross-dressing, rape, assassination and crimes of passion, his tale ripples with implicit parallels to our age: Saladin prepares for "the mother of all battles"; his army wages a holy war to liberate Palestine; the Muslim nations are bitterly divided into mutually hostile factions. Some may feel Ali takes liberties too freely, as when Ibn Yahub walks in on his adulterous wife having sex with Maimonides, the celebrated Jewish philosopher; yet, throughout, the main characters sustain a fruitful dialogue on life after death, history, the oppression of women and the nature of spiritual and romantic love.

I really, really liked this book! I came upon it in my search for books on Egypt before my trip there, and found it on Amazon. It sounded good, so I got a copy of it for myself (sadly, my copy is filled with highlights and profound comments in pink glitter pen like, "Lalalalalalalala." I shall have to purchase another one). I'm leading discussion for it at Historical Favorites, and I think discussion will go very well! This book is truly excellent. It's not so long that it exhausts you, and Ali swiftly goes over the war parts, which is wonderful for me :-)

The narrator is a Jewish scribe living in Cairo, hired by the sultan Salah-al-din to tell his story. He tells the story in a straightforward way, without waxing lyrical or poetic. I thoroughly enjoyed the way Ali set up the story, very much in an Arabian Nights-like manner. There are stories within stories, narrators narrating other people's lives, and lively, funny anecdotes that really draw you into the story. We meet a wonderfully diverse array of characters, all of whom have a great deal to add to the story. There is a theme of love throughout the story- the love of friendship, of romance, of intellect, of lust. There are strong female characters who are difficult, at best, to truly understand; there are strong male characters who push the story along. And, at the center, there is Salah-al-din, the charismatic, the brilliant leader who brings Islam together under his tight rein and then, ultimately, loses the war to fractures within his own religion.

The book has so much to offer- not only as an Eastern viewpoint on the seemingly never-ending war of religions in the Middle East, but as a thoroughly entertaining and beautifully-written story. Highly, highly recommended.
Musings by Aarti at 5:40 PM