"We Earth Men have a talent for ruining big, beautiful things." 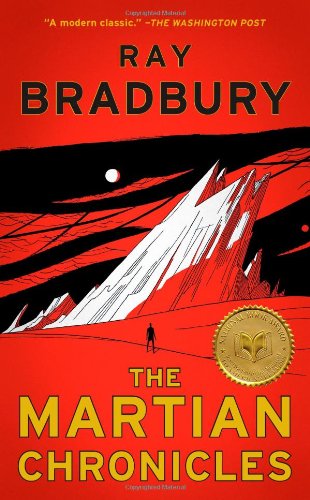 Ray Bradbury's The Martian Chronicles was nothing like what I expected.  I have not read much by Bradbury at all, but as this book is one of the most famous science fiction collections ever written, I expected it to be very old-school science fiction-esque.  But after doing some digging, I realized that the book (like all good science fiction and fantasy novels) is more social commentary and critique than anything else.

I really loved this collection of stories.  I have read many sad non-fiction books recently (as you all no doubt know), and one or two really sad fiction books, too.  And while The Martian Chronicles certainly has sadness, it is the melancholy type of sadness that I just really, really enjoy in books about colonialism and its effects.

And, quite frankly, that's what kind of surprised me about this book.  I know Ray Bradbury wrote Fahrenheit 451 (a book I have not read yet), but I guess I assumed that a 1950s era white guy from a small town in the Midwest would generally be okay with an expanding American empire.  It warmed my heart that Ray Bradbury saw America in its post-World War II, Cold War prime and said - must we continue this endless cycle?

In this collection, Earthlings (specifically Americans) colonize Mars, mostly annihilate Martian society, and then watch Earth blow up in nuclear war from afar after greater and greater restrictions and censorship by the government.  This is the bigger story.  But the individual stories all ladder up to that story in small ways.  Bradbury's key theme seems to be that small acts can have large unforeseen consequences.  He points out the way that small miscommunications, petty jealousies, tiny insecurities can grow and take on really terrifying forms.  Many parts of this collection reminded me of Mary Doria Russell's The Sparrow, and that ominous line that is something like, "They meant no harm."  Even the best intentions can go horribly wrong.

There were some truly beautiful stories in this collection.  The Martians are telepathic, so they can read people's minds.  In the story that had me in tears, a Martian keeps changing shape to become whatever the earthling closest to him most desperately wants.  So he becomes a lost daughter or son, a thief, a friend.  As more and more people come to him, clamoring for the attention of their lost loved one, the Martian becomes terrified, shifting shape more and more rapidly, crying out for help.  And no one helps him because they just want their own needs met.

In another story, a man from New York is thrilled to open his hot dog stand just in time for the next rocket from Earth to arrive.  Some Martians come to talk to him about his land.  He panics, thinking they are going to take his hard-won hot dog stand from him.  So he shoots one.  And then he shoots another.  Finally, the Martians inform him that they are giving him more land, not taking his land away.  He is jubilant until he looks into the sky and sees a massive explosion on Earth as a horrible war takes its toll.


“It was all a mistake,” he pleaded, standing out of his ship, his wife slumped behind him in the deeps of the hold, like a dead woman. “I came to Mars like any honest enterprising businessman. I took some surplus material from a rocket that crashed and I built me the finest little stand you ever saw right there on that land by the crossroads—you know where it is. You’ve got to admit it’s a good job of building.” Sam laughed, staring around. “And that Martian—I know he was a friend of yours—came. His death was an accident, I assure you. All I wanted to do was have a hot-dog stand, the only one on Mars, the first and most important one. You understand how it is? I was going to serve the best darned hot dogs there, with chili and onions and orange juice.”

One story that touched me deeply was about an encounter between a Martian and an Earthling.  The Earthling looks around him and sees a dead planet, with dusty cities that were abandoned centuries ago by a species long extinct.  He sees only what he wants to see, the planet becoming more and more like Earth.  To him, the Martian is a ghost.  The Martian looks around him and sees a vibrant and beautiful city, full of music and laughter.  He does not see what the Earthling sees.  To the Martian, the Earthling is a ghost.  The two argue and try to convince the other of their argument, but each fails.


“Who wants to see the Future, who ever does? A man can face the Past, but to think—the pillars crumbled, you say? And the sea empty, and the canals dry, and the maidens dead, and the flowers withered?” The Martian was silent, but then he looked on ahead. “But there they are. I see them. Isn’t that enough for me? They wait for me now, no matter what you say.”

These stories are obviously about the impact of colonialism on a people and culture, the use of force against someone who cannot fight you, the huge difficulties that arise when people talk past each other and do not try to understand the other's point of view.  I found these stories so moving, given the current political climate.  But there are other stories, too, that really spoke to me.  About loneliness in so many forms and how it can affect a person.  A Martian housewife who dreamed of a happier life with an Earthman.  A man so desperate for company after the population is wiped out around him, and then finds that he can't stand the only other person left on the planet.  A priest who wants to bring Christ to the Martians, even though they are not human.

I loved so many of the stories in this collection.  I do not read many audiobooks any more as I don't sit in my car for a long commute each day, but I found the audiobook version of this collection absolutely spectacular.  I listened to it while cooking and cleaning in my kitchen, on walks around the neighborhood, and over my lunch break at work.  I loved the narration.  I already mentioned that some of the stories brought me to tears.  I hope that if you try the collection, you feel as deeply moved as I did.
Musings by Aarti at 10:00 AM