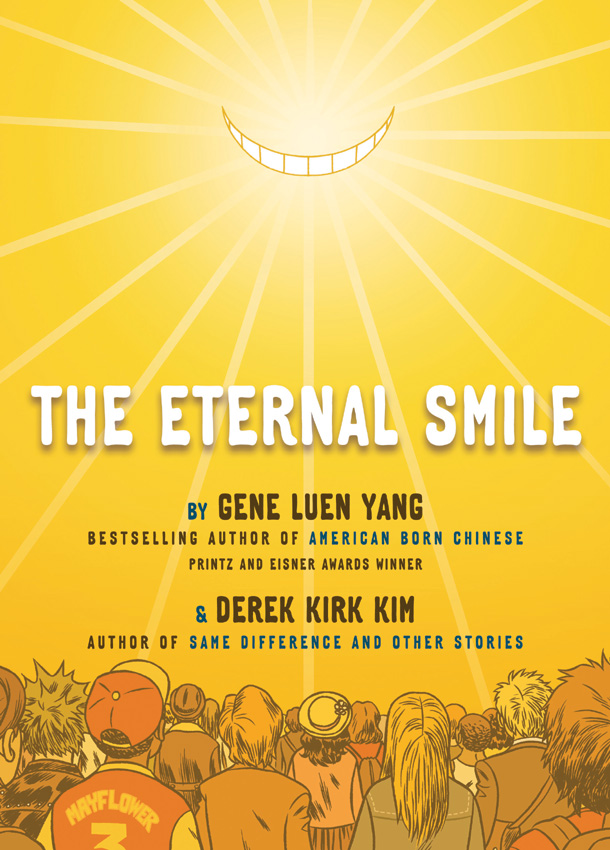 I realized in March that it had been a long while since I had last read a graphic novel!  So, I set off to fix that.  Quite a big Gene Luen Yang month, as I also got Boxers & Saints from the library, though will be reviewing those two in a separate post.

The Eternal Smile, by Gene Leun Yang and Derek Kirk Kim was very different than I expected.  Like, very bizarrely different.  In some ways, it reminded me of some of the short stories in Haruki Murakami's The Elephant Vanishes because the stories started off seeming pretty normal and then all took a surreal, magical realism turn.

There are three short stories in the book.  The first is about a prince who finds that heroic acts come a little too easily for him to be true; the second is about a frog who wants to make a lot of money; and the third is about a woman who donates money to a lost cause but becomes more self-confident.

Maybe it's because the other books I know by Yang, American Born Chinese and Boxers & Saints, are set in a very real world without a lot of surrealism, but this book just took me completely by surprise with its oddities.  So while reading the book, I don't know that I loved it.  However, the stories are beautifully illustrated, especially the last one with its fantastic use of color, and they do have a lot of heart.  At the center of each story is loneliness (why do so many short stories deal with loneliness?) and the many coping mechanisms that we have to make our days just a little bit easier and our lives just a tiny bit brighter, if only for a little while.  I appreciated that, and while the stories were certainly quirky, they did relay that fact in a very sympathetic and beautiful way.  My favorite was the last story, Urgent Request, because it was just so well-illustrated. Surprisingly, Embroideries is the first book I've read by Marjane Satrapi.  I definitely want to read Persepolis, but, well, Embroideries was on the library shelf and I picked it up.

I think I liked this book more than many other people did.  I can see why people dislike it.  It does, after all, mostly center on women talking about their lady parts and their relationships with men.  I have always had this vague idea that Satrapi is a serious feminist, so I was surprised that she wrote a book that was about some superficial stuff.

But there is a lot of feminism in this book!  And I enjoyed that.

First:  it's a book about Iranian women talking quite openly about sex and what they like and dislike about it.  This in itself is a feminist act, and one that fights against the ignorance of the western world.  So many of us in the west think of Muslim women as being oppressed and repressed (and therefore ignorant).  But Embroideries shows how women even in a very strict culture confront themes that all women do, and make the most of the lives they are dealt (as all of us must).  One of the women had been married three times, one had plastic surgery, and another was not a virgin when she got married.  It was quite powerful.

I also really enjoyed the strong bonds between women.  There was no cattiness, no two beautiful women fighting over the same man, no big fight for no reason.  It was such a wonderfully supportive and trusting environment, where every woman felt comfortable sharing some of her deepest fears and secrets with the others around her.  And it had so many rich, multi-generational relationships that I think many of us in the US are missing.  I would never dream of asking my grandmother about her wedding night, or my mom about her physical relationship with my dad, or my aunt about ... well, anything like that.  But maybe in a situation like the one Satrapi details in this book, I would.  Because everyone feels comfortable and no one is being judged.

So while I don't think that the subject matter of the book itself was SO AMAZING on a literary level, I do think this book had a lot of positive points, and I look forward to reading more by Satrapi!