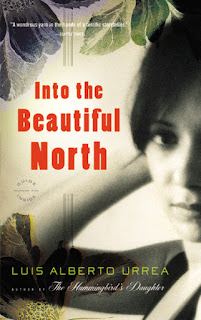 One of my unofficial reading goals for the year is for at least 50% of the books I read to be written by people of color.  A difficulty I have with this goal is that my personal collection of books is sadly not very diverse.  While I work on purchasing more books by minorities, I have been supplementing with selections from the Chicago Public Library's fantastic collection of audiobooks.

The most recent book I've gotten from that collection is Into the Beautiful North, by Luis Alberto Urrea.  Urrea is an author of Mexican and American heritage who writes both fiction and non-fiction about immigration.  Into the Beautiful North is about a group of young Mexican women (and one man) who live in the town of Tres Camarones.  Over the past several years, the economy has dried up and all of the men have left town to try their luck in America.  As a result, there are no men left to defend the city from the mafiosos and there aren't any children around, either.

After watching the movie The Magnificent Seven at the local theater, a small group of friends gets the inspiration to go north to America, find seven Mexican men, and bring them back to Tres Camarones to keep the town safe from the mafiosos.  So they set off into the beautiful north on a grand adventure to save their town.

The audio version of this book was fantastic.  The narrator, Susan Ericksen, picked up the wry and self-deprecating tone of the characters and she seemed to be at ease switching from English to Spanish and back again to share the story.  Her voices for each character were also great - it's not that she had different registers for each character, but she voiced their parts in a way that let their personalities shine through.  For example, Nayali, the main character, had a sort of dreamy, kind voice, while her friend Tacho was sarcastic and funny.

The storyline is a lot of fun, too.  It's rare to read about illegal immigrants who plan to take people back across the border, and I think by making this his premise, Urrea was able to dodge a lot of bullets in this gray area of US policy and just make the book fun.  The drama of getting across the border is conveniently solved by a deus ex machina, and so instead of having a story filled with tense, terrifying, and emotionally exhausting scenes about border crossings and immigration officials, Urrea was able to bring lighthearted humor and a lot of fun to his book.  There are so many funny scenes and great lines.  Any scene with the slumdog ninja Atomico in it was priceless, as he was able to combine sliminess with kindliness in a way that was both annoying and heartening.  Also, most conversations with the mayor of Tres Camarones, Irma, a former bowling star were funny, especially when she reminisced about her days as a competitor.

The book in many ways is about a fun road trip that a group of friends take together and all the adventures, romances, awkward situations, and small triumphs they experience along the way.  But there are also some really touching scenes, like the first time Tacho goes to a gay bar and feels like he's finally home and comfortable with the people around him.

It's a fun book, and a pretty fast read.  A great re-introduction to Latin literature for me!
Musings by Aarti at 7:30 AM