Musings: The Round House 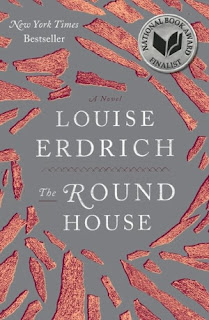 Louise Erdrich's The Round House is this year's National Book Award winner.  It's been in the news and blogosphere a lot and has garnered many comparisons to To Kill a Mockingbird.  This is pretty much what decided me on reading it - a Native American To Kill a Mockingbird sounds pretty amazing.

The Round House is narrated by Joe, a 13-year-old Ojibwe boy living on a reservation in North Dakota in 1988.  He and his dad come home one afternoon to find his mother sitting in her car, terrified and horribly beaten.  At the hospital, they find out that she was raped and attacked, but she refuses to give them any more information.  Joe's father is a judge, and he begins to piece together a case against the attacker but is limited by a complex system of laws that vary by location (on the reservation or off the reservation) and perpetrator (Native American or non-Native).  So the details that Joe's mother refuses to share make it impossible to take the attacker to court, even though everyone knows who did it, and even though the man continues to come to the reservation.

We learn all this from Joe over the course of a year in which he comes of age, makes independent decisions, cements his friendships with wonderful people and severs relationships with people who are not so wonderful.

This book was fantastic.  I can see where the comparisons to To Kill a Mockingbird come from, as Joe is a young protagonist with a father who is a surprisingly great shot and a defender of small-town justice.  Obviously, both Harper Lee and Louise Erdrich wrote these books to bring light to important issues that are often ignored.  But this comparison does a disservice to Erdrich, who constructed a story that stands on its own and should be recognized for its own merits, not just because of comparisons to a well-loved classic.

One of my favorite things about this book was the way Erdrich weaved in stories and beliefs from the Ojibwe culture.  Joe dreams of ghosts, listens to stories about creatures of legend, and uses his experiences of both to inform his thoughts and actions.  And everyone around him is immersed in the same culture so they understand his motivations, too.  There is one long-running story about a boy who must save his mother - here, the implications as they relate to Joe are clear, but neither Joe's story nor the boy's are straight-forward.

I loved the secondary characters.  Joe is at the center and he is a narrator with whom you can connect and sympathize, but the story is brought to life by everyone else.  The randy old man who just wants a strip show.  The war veteran priest with amazingly colorful insults.  Joe's friends and the antics they all get up to.  Whitey and Sonja and their volatile relationship.  I loved that Erdrich showed just how flawed everyone was, but also made clear the strong bond that tied them all together.  I think she's one of the most skilled authors I've ever encountered to do this - even as characters hurt themselves and hurt each other and make mistake after mistake, you can't help but hope along with everyone else that things will work out and get better and they'll all come out all right in the end.  Erdrich has a wonderful ability to give warmth to so many people without taking away from the suffering that they experience.

I also appreciated the way Erdrich shed light on how difficult it is for Native Americans to prosecute crimes committed against them.  I was horrified to learn that so much depends on where the crime took place and that a criminal conversant with the law can do despicable things and be pretty certain of getting away with them.  There was a statistic in the afterward that said 1 in 3 Native women will be raped in her lifetime; 86 percent of rapes are perpetrated by non-Native men.  Those numbers are staggering, not only for the sheer number of rapes occurring but also because it implies that 86 percent of those will fall by the wayside due to the set up of laws.  The difficulty in getting justice for these women is compounded by the fact that most people don't even know that these complications in law and procedure exist.

I hope that this book winning the National Book Award will bring light to this situation for many people and help initiate some much-needed reforms.  A beautiful book - highly recommended.
Musings by Aarti at 7:00 AM