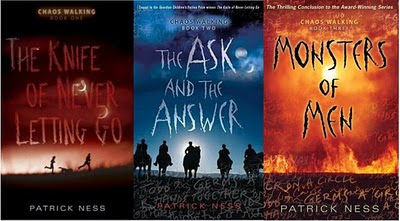 I listened to the Chaos Walking trilogy in audiobook format in a very short amount of time (especially considering the length of the third book!) on my commute to and from work, at the gym, while cooking, on the bus... pretty much everywhere.  The series starts with The Knife of Never Letting Go, continues with The Ask and the Answer, and ends with Monsters of Men.  It takes place on a distant planet called New World, where human settlers have been living a subsistence lifestyle for about 25 years.  The native intelligent species, the Spackle, appear to have been almost entirely wiped out.  Everyone on New World can hear everyone else's thoughts - those of their neighbors, of their horses, of their dogs... everyone.  Except the women.  But there are no women in the town where our hero, Todd Hewitt, lives, so he really can hear the thoughts - the Noise - of everyone around him.

And then one day he must leave home with his truly wonderful dog, and he meets a young girl, Viola, who is a new settler to New World.  And as the two get to know each other on their adventure, and as we meet other characters in the books, we realize that much of Todd's world is built on lies upon lies upon lies, and it's difficult to know who to trust and what is true.

More than anything, this series is about information - the constant access to it that we all have, the dangerous ways we have of sorting through it, the things that stick out in our memory and those we are willing to forget, the way that charismatic or powerful people can manipulate it, the warped ways in which it can be presented, the withholding of key portions of it, and the intense need to have some space for yourself.  In New World, information leads to so many terrible (really, so many) things - genocide, slavery, war, dictatorships, terrorism... the list goes on.

Is it possible to like this series for its message and themes even though I disliked the characters and the absolutely frenetic pace?  Because that's how I felt about it.  I loved the way Ness brought in so many important themes to these books.  There's so much about free will, loyalty, safety, leadership and forgiveness (there is a lot to forgive here).  I liked how Ness brought in colonialism and the way people justify it, sexism and racism and the way people justify those, terrorism and the way that people justify that, totalitarian regimes and the way people justify those, and media manipulation - so much manipulation!  Reading this series can be really painful - bad things just KEEP HAPPENING, and you can see the tragic snowball effect that builds when trust is lost and people stumble and no one can quite forget what happened before, even as they cross their fingers and hope for things to be better and people to be kinder in future.

I really enjoyed these books for those reasons.

But the structure of the books really didn't work for me.  Maybe this is because I did them in audiobook, one right after the other.  But I don't think so - I think I would have been bothered regardless.  The narrators for these audiobooks are excellent.  There is so much feeling and inflection in their voices, and they truly personify their characters for me.  They were spot on.

But I just got so sick of the cliffhanger endings.  I am not sure how many chapters there are in this whole series - probably somewhere between 60 and 70.  And I would wager that every single one ends in a cliffhanger.  Honestly, it was exhausting.  At first, I wanted to keep reading to the next chapter, but after a while, I started playing a game with myself to guess very quickly in my head whether a certain phrase was the end of a chapter or not.  This may offend a lot of Ness fans, but the constant cliffhangers felt very Dan Brown to me.

And then in the third book, not only did the chapters end in cliffhangers, but the narrator of each chapter flipped mainly between the two central characters, Todd and Viola.  So many chapters ended/started like this:

Is it necessary to say it all twice?!  I cannot tell you how many times Todd and Viola screamed out each other's name.  This was annoying as a general rule, but it was made even worse by having the fact relayed to me twice.  In audiobook format, it is even more frustrating.

The other aspect of these stories that bothered me were the villains.  In the first book and the third book, the villains just DO NOT STOP.  I feel like Aaron in the first book should have died like, four times, and yet he kept coming back.  And I thought I had reached the end of the third book (and the series), only to find that I had 3.5 parts (out of 14) still to go.  And in those 3.5 parts, the villain just kept coming and coming, too, even though he could have just nicely walked off into the sunset so much earlier than he did.  But no - BAD THINGS CONTINUED TO HAPPEN.

So... I don't know.  Most people I know that have read this series have loved it.  I was blown away by the other Patrick Ness novel I read, A Monster Calls.  The man's writing brought me to tears.  But I just never felt as connected to Todd and Viola in this series (though they were pretty tough cookies), probably because of all the dramatic cliffhangers and name screaming.  Still, though - a very powerful series that brings attention to the information that inundates our lives constantly.
Musings by Aarti at 7:30 AM