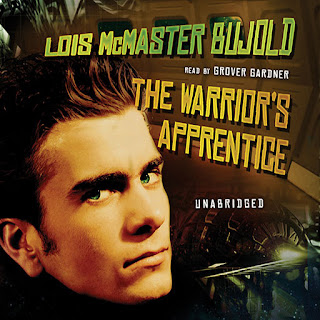 I first heard about Lois McMaster Bujold's on a Yahoo! Group dedicated to Dorothy Dunnett's Lymond Chronicles and House of Niccolo novels. Miles Vorkosigan is often compared to Francis Crawford of Lymond, and after reading The Warrior's Apprentice, I can completely understand the comparison.  Both Miles and Francis have a lot of gumption for aristocratic teenagers.

I finally got my hands on the first book in the (Miles portion of the) Vorkosigan series via audiobook download!  I have no idea when I will read the next book in the series because the library sadly doesn't have all the books available in audiobook.  But now I've started the series, and I have plans to finish it, whenever that may be.

So what's the book about?  Miles Vorkosigan is a stunted and crippled 17-year-old who fails the physical exam to join the Imperial Army, so sets off on a trip to see his grandmother on a distant planet instead.  When he arrives on Beta colony, he somehow gains control and ownership of an outdated airship, a deserter from the Barrayaran army, and a commission to deliver weapons to a region in the midst of a horrible, long-running war.

I would talk more about the plot except that I was listening to it via audiobook and the OverDrive app often lost my place and I admit to being quite fuzzy on some of the greater details.  But, as you will see in any review of this book, it doesn't really matter what the plot of this book is.  What matters is Miles Vorkosigan, a man who begins the book as an idealistic and naive young man who values his honor and keeping his word and looking good in front of his childhood crush, and ends the book as a subtle, brilliant commander who is thrilled to have finally made his legendary father proud.  And I don't use the word brilliant lightly.  Miles is very, very intelligent.  This could get annoying very quickly, but Miles has such a self-deprecating sense of humor, such a burden on his shoulders of being too short, too slow, too handicapped in a society that practices infanticide of children it deems deformed, that he never gets annoying.

I have not read widely in the science fiction genre, but if there is more out there like this, then I think I will read both widely and deeply.  I don't enjoy dystopian fiction (well, except for Battlestar Galactica), but I enjoy reading about intelligent people finding clever solutions to problems that hurt as few people as possible.  That is really what Miles Vorkosigan does.  His development as a character in this novel is wonderful - he learns that keeping his word is not always the best action to take.  He learns that heroes can have feet of clay but that their flaws do not lessen the great deeds they've done.  He learns the value of loyalty and forgiveness and kindness and second chances.  Miles makes mistakes - sometimes huge mistakes.  He fumbles to choose the right words, and often misses the mark.  But he learns from those errors, apologizes for his mistakes, and attempts to be better.  He is always, always striving to be better, to be a son that his father can be proud of.  And really, every scene between Miles and his father is so emotional and so beautiful that you will just fall in love with them both (luckily, Miles' father has his own two books dedicated to him and Miles' mom, so I shall be looking for those as well!).

Truly a wonderful book with a flawed, passionate and brilliant man at its center.  Can't wait to read more in this series!
Musings by Aarti at 7:00 AM