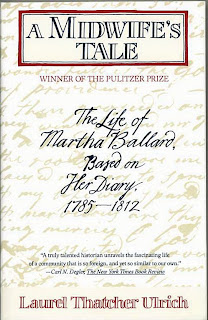 Laurel Thatcher Ulrich is a pretty amazing person.  I cannot describe to you just how much research she did before presenting the world with the gift that is A Midwife's Tale:  The Life of Martha Ballard, Based on her Diary 1785-1812, but I assure you that it was a RIDICULOUS amount.  Ulrich can take an entry that says, "Calld from Mrs Howard to Mr McMasters to see their son William who is very low.  Tarried there this night" into this fantastic commentary about social class, Revolutionary era medicine, town gossip and so, so much more.  It is absolutely amazing.  I feel like Martha Ballard wrote her diary just for  Laurel Thatcher Ulrich to read and find mysteries to be unlocked.

A Midwife's Tale is about Martha Ballard's life in Hallowell, Maine in the period following the Revolutionary War.  Ballard practiced as as midwife for the town, and she was very, very good at her job.  She also kept a diary very consistently, every day, for many, many years.  Until Laurel Thatcher Ulrich came along, no one really knew what to do with the diary.  It is not exactly loaded with juicy details,as you can see from the snippet I shared above, but it is written very consistently.  Ulrich decided not to look at the diary in a vacuum.  She read it and then annotated her research with other diaries from the same town, judicial records from the region, land grant information, local history, and all sorts of other fantastic things.  The result is a rich, nuanced, and highly readable history of not just one woman or one town, but of an entire network of people who lived and worked together in a highly structured society.

Ulrich gives us the town gossip (for example, a long-time widower marrying a woman younger than his youngest daughter, and then fathering two children with her), shares anecdotes about pre-marital sex (it happened way more than you'd expect) and paternity laws of the period (this was really fascinating!), and gives us great detail about what Martha Ballard's life must have been like through its stages- as a woman with young children, teenaged children, and then adults.  Through it all, we come to know Martha as a kind, loyal woman who cared more about people's actions than their words and who kept many of her thoughts to herself.

It's truly amazing because, as Ulrich says in the introduction, "Without the diary, her biography would be little more than a succession of dates...Without the diary, we would know nothing of her life after the last of her children was born, nothing of the 816 deliveries she performed between 1785 and 1812.  We would not even be certain she had been a midwife."  In fact, at the end of the book, Ulrich points out that we would not even have known Martha's first name.  We only know it was Martha because she happened to write it, in big bold letters, at the end of one volume.  But because she kept a diary, and because people near her kept a diary, we have a truly three-dimensional perspective on her life and times.

One of my favorite things that Ulrich does is really weave a rich web of detail.  For example, early in the book, she describes the economic environment of Maine and the system of one person's favor being repaid much later in a completely different way by another person.  For example, she walks through how, over the course of three years, one of Martha's cousins paid her back for lodging by getting shingles that then eventually became a new dress for Martha.  It was a really amazing bit of detective work by Ulrich, and I greatly appreciate her efforts in that manner.  I also really loved the way Ulrich described a system of "family labor" and just how much Ballard's work as a midwife was impacted by the presence of children or hired help and the support of her husband.  Ulrich pulls in so much information in this book- it's truly magnificent.  We learn about how the practice of medicine changed midwifery, about the religious dissent present in the small town of Hallowell, about a horrible massacre that took place just down the road from Martha, about her sometimes difficult relationships with her children.  Martha Ballard truly comes to life once again, and is given so much respect by a researcher who was willing to dedicate so much time and effort to learning more about her.

I thoroughly enjoyed reading this book.  I loved learning about Martha's life, and about how childbirth was just one dimension of a full and varied schedule of tasks.  I enjoyed learning about the trials and successes of every day life in rural Maine.  History is often taught as a series of dates that have great import- battles won and lost, presidents elected, bills passed.  But A Midwife's Tale gives us the minutiae of daily life- friendships, arguments, economic transactions and chores.  It was such a rich and satisfying portrait of life during the Revolutionary era.
Musings by Aarti at 7:30 AM