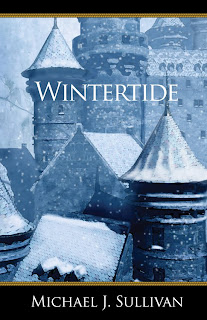 Wintertide is the fifth of six books in Michael J. Sullivan's Riyria Revelations series (see my review of the fourth book, with links to reviews of all previous books).  It gets harder and harder to do plot summaries of books that are further along in a series without giving away spoilers, so I'll just say that Royce and Hadrian are nearing the end of their quest to save the Heir of Novron and the Empress Modina is finally coming into her own and becoming a force to be reckoned with.  Hadrian enters a tourney, Royce debates settling down, and the intrigues of the palace continue.

I didn't love the fourth book in this series, The Emerald Storm, nearly as much as I liked the first three books.  Wintertide, too, disappointed me.  Royce and Hadrian don't spend much time together at all, which was disappointing.  There were a lot of characters with points of view telling the story, too, which I thought made it too muddled.  And, most distressing of all, the strong and resilient female characters all became loony with love.

Two of the three women with POVs, Arista and Amilia, spent much of the book bemoaning the fact that their chosen men didn't love them.  Amilia, I am fairly certain, cried in nearly every scene she was in.  For a girl who managed to rise up through the ranks of a pretty terrifying place, win the trust of an Empress, and get through a lot of complicated scenarios with her head still firmly placed on her body, you'd think she would not break down so easily.  But she does.  And Arista, too, is a really strong character who led a revolt and became an ambassador, but she just sits and cries in a dungeon for nearly the entire book, wishing that Hadrian found her pretty.  I mean, come on.  There isn't even any tension in these stories, I feel, because it's pretty obvious that the men do have feelings for these women and the women (like so many female characters in literature before them) are just far too clueless to realize it.  Well, Amilia catches on quickly, but Arista does not.  And Arista upsets me more because I had such high hopes for her.  She seemed strong and smart and sensible, but in this book she just is not.  A few books ago she had a beautiful romance with a younger man that didn't work out and in this book, she completely negates that relationship and acts as though it had no meaning, and is just, "Hadrian, I want you to want me" the whole way through.  It was very disappointing and really upset me.

The Empress Modina, at least, was a rock star in this book.  Finally, the girl has woken up from her grief and is ready to kick some ass.  I am so glad that she stepped up, and I am really looking forward to seeing what she does in the last book.

This book felt a little hollow and forced to me.  The language seemed more stilted, like Sullivan was trying too hard to inject humor everywhere.  For example, in describing the snide and cruel ways ladies of the court talked to each other:  "Oh, my dear, I simply love that dress!  I imagine it is insanely comfortable, given that it is so simple.  Mine, on the other hand, with all this elaborate embroidery, is nearly impossible to sit in."  And then Hadrian, trash talking during a fight:  "You hold your sword like a woman.  No, that's not true.  I've actually known women who can swordfight.  The truth is, you're just terrible."  Or a high-ranking official from a university, describing his reason for coming to town:  "At my age it takes a bit more than the allure of jingling bells and sweatments to rouse one such as I from warm chambers in the depth of winter."  It just didn't seem to flow very well, and came off feeling more clumsy.

And I feel like much of the series, there's a build-up to this war against the elves, and a lot of talk about how elves are treated horribly, but we GET NO ELF ACTION, EVER.  I do not know when the revelations for which this series is named will actually happen.  In this small, slight way, this series reminds me of the Song of Ice and Fire series because people are so bogged down with the political intrigue and the details of what is going on right now amidst their kingdoms that they completely miss the whole "Winter is coming/The elves are revolting" big picture, and after five books in series that are only six or seven books long, it feels like we just haven't arrived at the main plot and have just been spending our time worrying over minor details.  I may be way off in my estimation because I haven't read the end of the series yet, but I feel a little frustrated about it.

That said, I will obviously be finishing this series!  I do really like Hadrian and Royce, and I hope like crazy that they spend more time together in the next book, fighting evil with swords and witty banter.  I also hope that these lovesick women wake up and return to the awesomeness that I know they are capable of.  And I want to see the elves!

This series of books has been picked up by major fantasy publishing imprint Orbit and is being released as a trilogy.  The first two books, Theft of Swords and Rise of Empire, are available now.  The third book, Heir of Novron, will be released in January, so if you want to sink your teeth into some epic fantasy and get through the whole series in less than five years, here's your chance!
Musings by Aarti at 11:30 PM