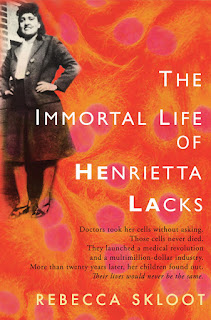 The Immortal Life of Henrietta Lacks is one of the most popular non-fiction books to have come out over the past year or so.  It's about a 30-year-old woman in 1950s Baltimore who had a severe case of cervical cancer.  While being treated at Johns Hopkins Medical Center, the doctors took part of her tumor (totally normal practice at the time).  The cells from that tumor grew and multiplied more quickly than any other cells in culture ever had, and became known as HeLa, a strand used to help cure polio, to determine the effects of outer space on the human body and many other things.  Henrietta Lacks' family, though, only knew about this much after the fact, say that they have been lied to about the whole procedure, and none of them even has healthcare, even while many more corporations and laboratories make money off of Henrietta's cells.

I really enjoyed this book and found the science of it fascinating, but I admit that I didn't love it as much as I thought I would.  The whole story of the cells and the science and ethics and extensions of them was fascinating.  I loved learning about how HeLa has been used to advance science, really enjoyed debating with myself internally about the ethics of doctors using a person's body for science without that patient's consent, and was utterly fascinated by the way the HeLa cells contaminated so many cultures and cost millions of dollars in lost and wasted research, leading to a much more stringent cataloging and sterilization system.  So interesting!

But the science is just half of the book.  The other half is about Henrietta's family and about medical history around African-Americans in general.  These parts of the book made me more uncomfortable.  I think this is a good thing- it's important to step outside your comfort zone and see the world from someone else's perspective.  And being uncomfortable is a learning experience.  For example, my brother has spent a lot of time working with AIDS patients in the US and in India, and my father is a general practice doctor in a pretty poor area of Chicago.  Both have told me multiple times that African-Americans just don't go see doctors regularly, or often enough, or until a condition has gotten so bad that they just can't help it any more.  I never understood this, but my brother would just shrug and say, "They just don't trust doctors very much."  This didn't make sense to me because why would one minority population over any other type of population feel so strongly about something like that?  In reading this book, I realized it's because there were many studies done on African-Americans that were not ethical at all.  This knowledge and fear has been passed down over generations and clearly still exists today- the community as a whole is very wary of doctors, and with good reason.  But it is so, so sad to see the way it is played out in this book.

Henrietta Lacks herself seems to have been a vibrant and interesting woman, but I can't help thinking that if she had lived out several more decades, she would have seen a lot of heartache.  Her children grew up impoverished, abused, angry and uneducated.  I was so stunned reading about their lives, which in no way mirror mine at all.  In the 1990s, Henrietta's daughter Deborah was still using kerosene lamps to light her apartment.  Her son Lawrence did not understand the concept of a cell.  Another son needed triple bypass surgery.  Her youngest ended up in prison for murder.  Another daughter died, alone and forgotten, in an insane asylum.  Most of Henrietta's family thought that by keeping the cells alive, Henrietta was alive.  They thought that Henrietta's cells had cured cancer.  They thought Johns Hopkins had made a ridiculous fortune off their mother's cells.  They were really, really paranoid.

I can't yet wrap my head around everything that was presented in this book.  For much of it, I felt that Henrietta's husband and sons just wanted monetary compensation for their mother's cells, and didn't really care much at all about learning how she had helped advance medical knowledge.  Her daughter, Deborah, seemed much more keen to learn about her mother as a person, but she was also so paranoid about everyone's motives.  So much of this book is a very intimate, disturbing journey into an American family that has never overcome the race barrier.  It just made me sad.

It was a very eye-opening and powerful read, though- not just to learn about the science and politcs behind HeLa and the medical advances achieved using that cell strain, but also to learn about Americans that lead very different lives than mine.
Musings by Aarti at 11:30 PM