Musings: The Unfolding of Language 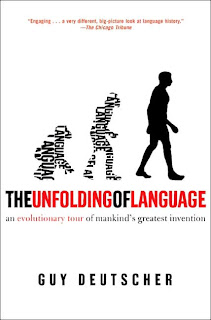 Like many readers, I have a fascination with language itself.  How was it created?  How has it changed?  Why is there so much structure?  Why are some aspects so unstructured?  How are new words added and old words removed?  How were words formed in the first place?  It's so interesting!

Some years ago, I read a blog post that mentioned a book by Guy Deutscher with the fantastic title The Unfolding of Language:  An Evolutionary Tour of Mankind's Greatest Invention, and immediately I went out and got the book for myself.  And then let it sit on my shelf, unread, for quite a while.

But I was recently motivated to pick it up and it does not disappoint!  Really, the formation of language and the way it's evolved over the centuries is so, so interesting.  For example, did you know that even though the word "I" has been spelled the same way for years and years and years and years, the pronunciation has changed drastically?  It used to be pronounced "Itch" (much closer to German).  And then it became "ee," and then "eh," and then FINALLY only in the 18th century did it start being pronounced the way we pronounce it today.  But it has been spelled the same way since the 14th century.

This fact inevitably leads Deutscher to point out that, "When reading Jane Austen or George Eliot, for example, one is tempted to assume that their characters sounded just like actors in BBC costume dramas.  The reality was rather different however."  Obliged was pronounced "obleeged," daughters were "darters," Rome was "Room," gold was "goold," and china (horribly) was "chayney."  And it's because English spelling has stayed the same while pronunciation has gone gallivanting about doing whatever it wants that English spelling makes no sense.  If that doesn't strike you as a completely awesome fact to randomly bring up in dinnertime conversation, I don't know what will.

I think one of my favorite things about Deutscher's writing is how utterly dramatic he is when referring to language's evolution.  For example:


The devastation that erosion metes out is perhaps most conspicuous with case systems, which of all monumental structures seem to be most vulnerable... So not much more than a millennium after Cicero, the majestic Latin case system had been entirely wiped out of existence.  An even earlier casualty was the case system in the Germanic branch of Indo-European...But not even this reduced system succeeded in standing up to the onslaughts of erosion for very long, as soon after the tenth century, the final syllables were weakened and the whole edifice started to collapse.  By the fifteenth century, the system was in tatters and only the forms ending with an s remained in any way distinct...It is this depleted system that has survived...

Really, one would think Deutscher was talking about the utter and complete extinction of the dinosaurs, rather than Latin losing the vocative case ending (which, in my opinion, was completely worthy of extinction).  He gets so excited by and passionate about language- hilariously so- that one can't help but be excited with him.

And that's just one aspect of language that Deutscher covers in his book.  He also talks about metaphors and the propensity of people to use ever-bigger and more extreme words to describe things, thus causing these words ("awesome" springs to mind as a modern-day example) to lose their extreme and highly descriptive status.  You know what word started out as meaning very extreme?  How about the word "no"?  Yup.  You had to be pretty against something in the tenth century to use no in a sentence.  And now, well, "no means no."

There are times when this book is very dry and focused on structure.  Deutscher spends a lot of time explaining how Semitic languages became so highly structured.  He also has a quirky writing style, alluded to a bit above, that can get a little trying.  But this book is littered with so many etymological gold mines that I was engaged the whole way through, and have already started telling all my friends interesting facts like, "Did you know that the word repent used to mean EXACTLY THE OPPOSITE of what it does now?  I'm serious!  It did!"  So for that alone, the book is well worth reading or scanning.  It gives you a new-found appreciation for language and the ability we all have to share complex thoughts with each other, even as language evolves and word meanings change all around us.
Musings by Aarti at 11:10 PM