Musings: The Girl Who Circumnavigated Fairyland 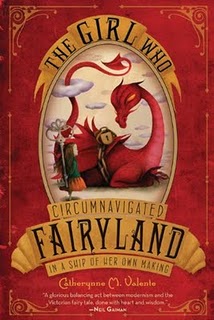 When I first saw the title The Girl Who Circumnavigated Fairyland in a Ship of Her Own Making, I wanted the book.  When I realized the author of this young adult novel is none other than Catherynne Valente, who wrote the excellent The Orphan's Tale:  In the Night Garden retelling of the Arabian Nights, I wanted it even more because believe me, the woman knows how to tell a fairy tale.

Luckily, I got my grubby hands on a copy of the book and read it immediately.  And, as expected, it was splendiferous.  Really, the more I read books set in Faerie/Fairyland, the more I want to go to there.  Well, kind of.  Fairies can be nasty beasties.  So I guess if I were to be perfectly honest, I'd have to say the more I read about Fairyland, the more I want to read even more about Fairyland.  It's just so fun and colorful and glorious, but also dark and sinister and creepy.  Great combination.


This book felt very much like The Phantom Tollbooth to me.  It starts with a precocious, bored 12-year-old girl named September (even though she was born in May) being spirited off to Fairyland by the Green Wind.  Once she gets through Customs, she is left to her own devices to make her way.  She chooses the path that promises that she will lose her heart (a better bargain than losing her way, her life or her mind, she reasons).  She comes upon three witches who tell her that they need a magical spoon that was stolen from them, so September grandly decides that stealing the spoon from the evil Marquess shall be her quest.  She sets off to do so, meeting all sorts of wonderful characters along the way, such as El the Wyvern, who becomes her very best friend, and Saturday the Marid, who can grant wishes.  And, as expected, she loses her heart and gains a lot of courage along the way.

If I were to sum up this book in one word, that word would be whimsical.  But that wouldn't be a fair word to use because by the end of this book, there is a lot that is not whimsical.  Like much young adult fiction, it's written for people at the cusp of becoming adults, realizing that their decisions have consequences and that the way they act says a lot about them.  And so September thinks through every decision and never gives up, even when she is tired and homesick and lost.  She is such a kind person and reminds me in a way of Bod, from The Graveyard Book.  She opens her heart to all sorts of lost souls, absolutely certain of the fact that everyone deserves respect and dignity, and fighting hard to give it to them.

There are so many delights in this book and I won't ruin any of them for you, I promise.  I feel the ending opens the story up for the possibility of a sequel, and I hope there is one.  But if there isn't, I think the ending was quite lovely as it was.  If I've piqued your interest at all, much of the story (except the ending) is available online, at Catherynne Valente's website.  If you enjoy tales of whimsy and magic, I highly recommend checking it out!

Note:  This review is based on an advanced reader's copy.  I received this book for free to review.
Musings by Aarti at 11:05 PM