Completed! BBC's A History of the World in 100 Objects 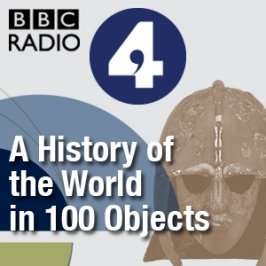 For several months now, I have been listening to the BBC 4 podcast A History of the World in 100 Objects.  It's a fascinating look at human history through the things we make and use- from a crudely shaped rock to a solar panel.  This is right up my alley, of course, being that I love history.  But I also think if you do not love history but just want to feel more informed about the world around you (or love to spout off random facts during conversation), this is a great way to do it.  The podcasts are all about 14 minutes long, so it's easy to listen to one or two on the go, on a commute or while cooking dinner.  They are also completely addictive.  Once you finish an episode, it is hard not to go immediately on to the next one (or the next five).  While it is unlikely you will remember all 100 objects, or even a fraction thereof, I think the program itself is fascinating.  It's a podcast.  You can't see the object that is being described.  And yet... it doesn't really matter as the thing is just a starting off point for a lesson in cultural history that puts the world in perspective for you.  How a Spanish gold coin started global currency.  How a South American llama statue symbolizes the fall of a great civilization.  How a painting helped open up Japan to global trade.

It really is one of the best podcasts I've had the pleasure of listening to, and I highly recommend checking it out, if you're into that sort of thing.

If you're not, but just want to read about the stuff- there's a companion book!

Anyway, I feel quite accomplished for finishing the podcast series, so felt the need to share the news!
Musings by Aarti at 11:04 AM