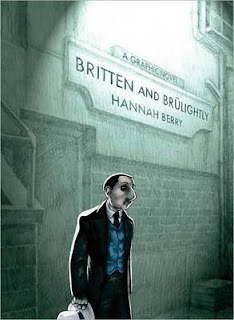 Britten and Brulightly is a noir mystery by Hannah Berry told in graphic novel format.  I first heard about it on  Layers of Thought.  After reading and enjoying Chew (even if that book's description did turn many of you off, I still thoroughly liked how unconventional it was!), I wanted to look into more graphic mysteries, so I was pretty excited to find this book!

Fernandez Britten is a private detective.  He does investigations for paranoid spouses, angry lovers, and a whole gamut of desperate people.  He also never spares them the truth he learns, which is how he earned his nickname of "the Heartbreaker."  When a woman comes to him claiming that her dead fiancee could not have really committed suicide, he takes on her case (with his very unconventional partner), and is led deeper and deeper into a mystery that also involves a former client. 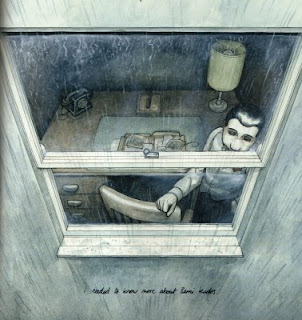 This book oozes noir-ness in abundance.  It is in every gorgeous panel of artwork, in the slight stoop of Britten's shoulders, in the voice of the narration and in every inch of every page.  This is a beautifully illustrated book, done in muted tones that hearken back to the golden age of film.  I could practically hear Sam Spade on the sidelines.  The Jessica Rabbit-esque female in distress, the twists and turns in a sordid plot, backstabbings and secrets and all the rest- it was riveting to read.  And just so fascinating to look at.  Perhaps it's wrong to buy a novel based solely on the cover, but is it wrong to be so entranced by a graphic novel's pictures that you barely register the words?

Probably, as I honestly can't say I followed the plot that well.  That's not to say it was difficult to understand or proceeded at a pace that didn't work for me.  I think I just liked the pictures so much I barely concentrated on the words and sometimes would get confused about who was who and what the history was.  Also, the novel does not have type-written words- it's all written in cursive script, which can sometimes be hard to read. 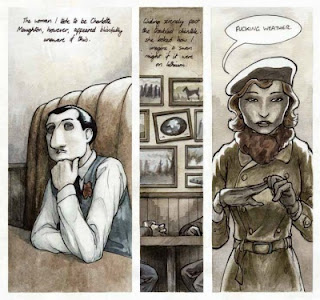 I did understand enough, though, to get the main gist of the story, even the ending.  I don't wish to give any spoilers away, but by the end of the book, I just felt such deep compassion for Britten.  Throughout the whole book, he looks desperately in need of a hug, and by the end, I wanted nothing more than to step through these water-color-esque pages and give him a big one of the bear variety.  Maybe it's because I'm still new to graphic novels, but it still stuns me that in less than 200 pages, with minimal words, I can feel so strongly about a character.  I can't say much more about this book (as it's a mystery!), except that I highly recommend it for the beautiful art and the melancholy tone.  I look forward to a lot more from Hannah Berry!
Musings by Aarti at 12:05 AM