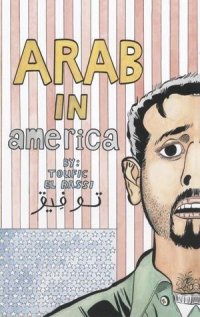 Arab in America is a graphic novel about Toufic El Rassi's experience... as an Arab in America.  Interestingly, he doesn't begin only after the September 11th attacks- he goes back to the 80s and 90s, with the Israeli attacks on Lebanon and the Gulf War and discusses how these events have impacted the way Arabs are treated in the US.

In many respects, this was a depressing read.  It seems that no one El Rassi has met in the US truly understands him, and he feels very isolated because of it.  This is particularly disheartening because El Rassi has lived in the US since he was a year old- and yet, he still doesn't feel welcome in the culture here.

The graphics in this book are alright.  All the panels are in black and white, but they didn't particularly grab me.  El Rassi states that he used to be very shy, and then as he became more secure in his background and his culture, he was more comfortable speaking out about his feelings.  I think you can see that confidence in his drawings, but I also don't think he is much of an artist by trade- the words are more important to him.  This isn't a man who is uncomfortable talking about important topics.  He confronts them and calls you out on them and forces you to consider your own actions.

I often feel most people in the western world don't really care about the variations between different subcultures.  For example, they'll use the term "Indian" to refer to anyone who looks a certain way, ignoring that there are multiple countries on the subcontinent.  And then people will assume that everyone from India is Hindu.  Or, now, that everyone with brown skin is Muslim.  Or that all the different tribes that used to populate America now fit under the general banner of "Native American."  In some ways, it's understandable- it is very easy to group people different than yourself into an all-encompassing "other" category until you have reason to care enough to get things right.  But in other ways, it's not okay at all.  Ignoring the variations in definitions or pronunciations of words implies to another person that she does not matter enough for you to get it right.  This happens to me all the time, to a less horrifying extent, with the pronunciation of my name.  I will say it, and inevitably, it is mispronounced.  I will correct the person, and she will again mispronounce it.  And then will keep mispronouncing it, often with an excuse like, "Oh, I'm probably just going to forget, but I don't mean any offense."

But really... how is it not offensive to continuously (and knowingly) mispronounce someone's name?  I pronounce other people's names correctly, and I don't think it's asking too much for them to pronounce mine the way that my parents meant it to be pronounced.

This is a point that El Rassi brings up in his narrative.  For example, he finds it grating on the ears that Americans pronounce Iraq as "Eye-RACK," when that is wrong.  How can you go in and claim to be restructuring a country, he asks, when you don't even know how to pronounce its name correctly?  When you don't even respect the people or the culture enough to try to pronounce it correctly?  No one does, not regular people on the street, not the generals fighting the war, not the President.  That sends a message, loud and clear.  A particularly moving scene is when El Rassi is seated next to a Sikh man on a train.  Two other men get on the train and begin to taunt the Sikh man, saying that he is a Muslim terrorist.  El Rassi wants to help him, but is paralyzed by fear that he will also be called a terrorist.  Or, worse yet, incite them to violence.  So instead, he sat and did nothing to defend the man, something he still feels immense guilt for.  And that sends a message, too. 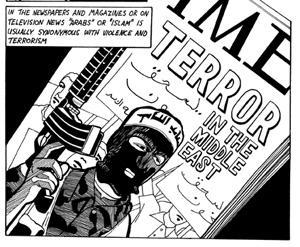 As do all the movies that portray Arabs in them, not least of which is Star Wars.  And the newspapers and magazine articles.  Always, there are stereotypes.  As El Rassi points out, almost all information about Arab cultures and countries that Americans get is filtered through white American eyes or prejudices first.  Arabs do not have their own voice in American society- they are always interpreted through other people.

All this serves to make people, even those who live and are brought up here, to feel isolated and unwelcome.  I admit, this is where El Rassi kind of lost me.  I personally have never felt unwelcome in the US due to my skin color.  I have never felt that I don't fit into the culture or that people don't understand me.  (El Rassi's experience particularly startled me because much of his story takes place in the Chicago area.)  Granted, he was in school about ten years before me, but I just can't imagine that his experience was that markedly different than mine.  I'm not saying that he's lying, I am just saying that my personal experience growing up in the Chicago area never made me feel as isolated as his did.  That said, though, I also grew up with a lot of Indian people around me and perhaps El Rassi did not have that support system. However, just like El Rassi, I very clearly remember the first time I realized I was "not white."  Or that I was different than most other people around me.  I think most people of color have strong memories associated with those moments of "other-ness," and I wish that El Rassi had had people around him with whom he could share his feelings. 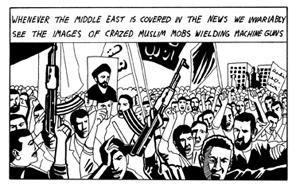 Arab in America is as much a political commentary as it is a memoir.  El Rassi points out all the illegal searches and morally ambiguous things the US has done to people of Arab or Muslim origin, almost always without justification.  He says that he is terrified of being sent to to the Middle East, where he does not understand the language or the culture.  But at the same time, he doesn't feel at home in the US, either.  It sounds like a miserable, lonely, and horrible position to be in and it's impossible not to empathize with his situation.  In many ways, it felt like this book was written just to get the frustration and sense of impotence off his chest, and feel that he has done something worthwhile.  He points out many hypocrisies (including his own) and really forces open your eyes on many different subjects.  I am glad I read this book, but at the same time... I am not sure if the people who should read this book are the ones that will read it.  I think its audience is self-selective, and I'm sorry for that because there are hard lessons here to be learned.