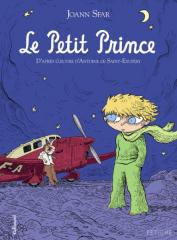 It was only after I started reading this graphic novel adaptation of Antoine de Saint-Exupery's The Little Prince that I realized I have never actually read the original version.  Has this ever happened to you?  I think for me, the case is particularly prevalent with children's books that everyone reads, and so I just assume I have read them, too.  And then... er, I really haven't.  This is one of those occasions.

But after reading this adaptation, I really want to read the original The Little Prince (well, translated into English).  The story is deceptively simple- a man's plane breaks down in the middle of the desert.  He works to fix it and then, almost by magic, a little boy comes up to him and asks the man to draw him a picture of a sheep.  From there, we are taken on a wonderful journey with a man rediscovering his childhood through the help of a mysterious young boy who hails from a distant planet.  The boy (the little prince of the title) describes to the narrator his journey to Earth.  He talks about his home planet, where he is the sole caretaker of three volcanoes and a beautiful rose.  He describes the other planets he visited, all with only one inhabitant- a king, a businessman, a geographer and a lamplighter.  Through the little prince, our narrator begins to rediscover a childlike wonder for the world. 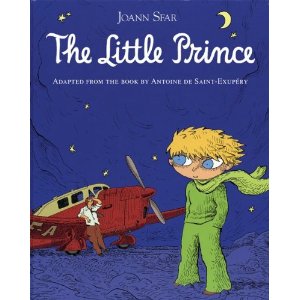 As I've never read the original of this story, my review may be a little different than others.  I can't compare the language or point out what the artist left out.  I can only say that this was a beautiful story.  I can't find samples of the pictures online (probably because the book hasn't been released yet).  I admit that at first, I wasn't a huge fan of the drawings.  They seemed odd and almost simplistic.  I am not sure if they are similar to Saint-Exupery's drawings, but they didn't do much for me at first.  But then as I got drawn into the story, I liked them more and more.  The illustrator, Joann Sfar, drew the pictures in a way that reminds me very much of nearly every children's book I read growing up.  There is a limited color palette.  Instead, the drawings depend much more on texture to convey depth and shadow and expression.  After several pages, I became much more comfortable with this and started to appreciate the effort that must have gone into illustrations like this.  I really thought the pictures added a lot to the story- they had a surreal and dream-like feel to them that complemented the words perfectly.

But, for me, it was the story that was so captivating.  I have a feeling it must be magical to read this book in its full, unedited glory.  I love the idea of a man who has lost his way meeting a child and regaining a sense of wonder and getting an entirely new perspective on the world.  I know it's been done before (or had it, when this was first published?), but not in such a beautiful way.  This story isn't just about a man who befriends a child.  It's about loneliness and isolation and a loss of idealism.  It didn't surprise me at all to find that this book was written and published during the German occupation of France during World War II.  Even though it is a lovely story, it also has a weight of sadness and loss in it.  I thoroughly enjoyed the experience of reading this and highly recommend it.  I also plan to read the full text as soon as I can!

This review is based on an advanced reader's copy.  I received a free e-ARC from NetGalley to review.
Musings by Aarti at 12:15 AM