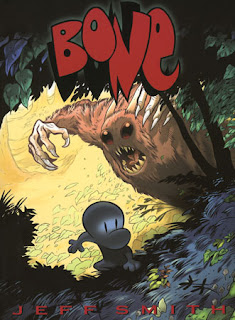 Bone is a graphic novel series (9 books in all) by Jeff Smith.  It is epic in scope, but I don't think you get a sense of just how epic until about halfway through the series.  Therefore, I'm glad I grabbed the one-volume epic when I saw it, because to be honest, if I had these books separately, I don't think I would have had much motivation to continue past the second book.  Luckily for me, though, I had all nine stories handily in one volume, so finishing the series was not difficult for me!

The story centers on three cousins- Fone Bone, Phoney Bone and Smiley- who were kicked out of their hometown, Boneville.  They come to a valley that is both beautiful and fraught with danger.  Strange rat-creatures try to capture them, seeming particularly interested in Phoney.  Fone befriends a young lady named Thorn who lives on a farm with her Grandma Ben.  But there is unease in the valley- rumors of sleeping dragons, a large tiger and locusts abound, in addition to the rat-creatures.

And, of course, there is Moby Dick. 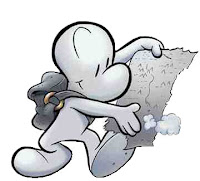 I really enjoyed this series!  I can tell already that this is going to be a shorter review than most of mine.   (I am sure you are all breathing a sigh of relief!)  First of all, multiple times while reading this series, I would see Fone Bone and just giggle because he is so cute.  I know that many cartoon characters are cute, but something about that big nose and those eyes just screams adorable to me.  I mean, really.  Look at him.

But there is more to Fone Bone than his Pillsbury Doughboy nature.  He is also loyal, kind and literary.  The perfect man, really!  And his cousins and friends are pretty great, too. 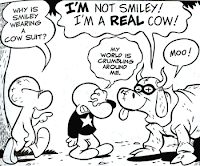 And I think that's why I enjoyed this series so much.  Yes, it becomes epic, yes, there is a girl who comes into her own, and yes there are plot twists and depths that you would never imagine at the beginning.  But somehow, Jeff Smith keeps it fun.  Even when the characters are in grave danger, or feeling really sad and miserable, their senses of humor are never far away.  Smith has an enviable ability to make his story full of epic fantasy tropes without getting bogged down in fantasy's tendency to be gloom-and-doom.  He never loses sight of the fact that he wants to entertain his audience.  So whether it's through jokes about the readability of Moby Dick, recipes for Bone-quiche or really miserably-written love poems, he'll have you smiling all the way to the last page.
Musings by Aarti at 12:13 AM