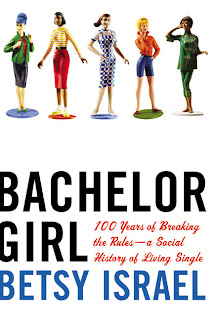 Bachelor Girl:  100 Years of Breaking the Rules - A Social History of Living Single was one of my rare impulse buys.  I saw the title and snatched it up immediately and gloried in the anticipation of reading a book celebrating single women in the 20th century.  However, that wasn't exactly what I got.

Betsy Israel starts her book by describing her own single life before she married in the 1980s.  She then goes back through history, starting with the American Victorian era and continuing through the early 2000s to describe what life as an American single woman was like.  But this book ended up disappointing me in almost every way.

First, Israel focuses almost solely on women in New York City.  She hardly ventures outside the city at all (she does chat about Boston for a bit), and to me that really smacked of the "New York City is the center of the universe and no one who doesn't live here matters" mentality.  I wish she had gotten out of the city a bit more as I am sure women who lived singly in rural areas faced a very different situation than those in New York.

Also, Israel's references were not what I hoped.  She used secondary sources for the most part, looking at newspaper articles.  She also appears to have watched every movie about women ever made and her conclusions drawn from this research were, to me, fairly sketchy.  I really hoped to get more first-person accounts of what it was like to be living single, and she had very few of those.  So really, her book wasn't so much about what it was like to be single as it was about media perceptions of single women.  I also was very disappointed by Israel's take on modern single women.

One thing that I found interesting and that bowled me over somewhat was how dangerous single women were made out to be in the past.  As though an unmarried woman threatened the very make-up of society and might lead to apocalypse.  This is something that comes up again and again in countless cultures and eras and it is so disturbing to me.  Really, the treatment of women throughout history disturbs me as people are always trying to classify us or put us into some box.  It doesn't seem like people have that same compulsion for men.  There is no need to "define" a man by his role, but there seems always to be a need to do that to women.  Single women are made to seem unnatural and hateful and horrible, and I ached for the women in this book who were made to feel so alone because they didn't go the traditional route.

I also found interesting that the feminists of the 20s and 30s were very disappointed with their daughters of the 40s and 50s for not doing more to advance women's rights.  From what it seemed like in the book, women of the 1940s felt that the generation before had achieved a lot, but also sacrificed too much for the attainment of it.  I think this is very similar to the way women who came of age in the 60s and 70s view the current generation, thinking that we aren't doing enough to advance our cause.

Overall, though, this book fell very flat for me and I am disappointed it didn't convert on what I think is a fascinating subject matter.  I think I'll just have to go for primary sources from each historical period for a more accurate representation of the feminist movement.
Musings by Aarti at 12:18 AM