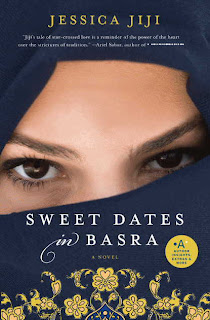 Sweet Dates in Basra, by Jessica Jiji, takes place in Iraq during and soon after WWII.  It begins with two best friends- Omar (Muslim) and Shafiq (Jewish- this confused me as Shafiq to me sounds much more like a Muslim name)- whose families live next door to each other and are very close.  One day, running away from trouble, Omar and Shafiq escape into the house of a friend and Shafiq meets the beautiful housemaid, Kathmiya, and their lives are never the same.

The story winds through the remainder of the war, the riots against Jews as the Germans come in, hints at the threats of Communism and the large, unexpected changes that occur in Iraq following the war.  Through it all, Shafiq & Omar's families support each other, and Shafiq & Kathmiya grow closer and closer.  But there is a secret in Kathmiya's past, and Shafiq's future in Iraq is uncertain.


This is one of those books for which I had very mixed feelings.  I really enjoyed getting to know post-WWII Iraq.  I know very little about the country at that time, and it was great to read a story about it.  I also loved that Jiji presented the Muslim and Jewish families as standing so stoically by each other through so much turmoil.  There was never any comment on religion between the two families; there was just complete and utter acceptance and friendship and kindness, which was lovely.  In that way, this book was a large contrast to Mornings in Jenin as there wasn't really any sense of victimization.  Yes, the Jews faced some discrimination, but Jiji also made sure that readers knew that many (if not most) Muslims treated them fairly, and that everyone viewed themselves as Iraqi.

I also liked the way the author showed how completely vulnerable women were in this era and this place.  For example, Shafiq's sister, Marcelle, is introduced via matchmaker to a man that no one likes or trusts.  Marcelle's parents dislike the match and walk away from the marriage.  But then somehow, the would-be-in-laws contrive to get Shafiq's family to attend a party, at which they introduce Marcelle as their future daughter-in-law, and Shafiq's parents stand by and do nothing because it would be too horrible to have a daughter who was "engaged" and then broke it off- no one would want to marry her after such a situation.  So instead, they let her marry a completely corrupt and ridiculous man.

This is pretty horrifying, but it is also in contrast to the very happy marriage between Marcelle's older sister, Leah, and her husband.  And it stands out so much because Marcelle's parents do love and care for her.  They are kind and good people who don't want their daughter to suffer; to them, her ending an engagement would be worse than her marrying such an ingrate.  It was revelatory to see such a situation occur, and to see how helpless Marcelle was in the proceedings.

I think readers were also supposed to feel sympathetic towards Kathmiya, but honestly, I didn't at all.  The entire book, Kathmiya was whining about how her parents won't help her find a husband (even though her mother tries very hard).  Her parents made her leave her marsh home and work as a maid in Basra- she complains about that, ignoring the fact that she is given more freedom and has Shafiq there to be her friend and help her learn how to read and write.  Every time she sees her mother, she complains to her about her single status, and whines and whines and whines.  And her family seems to know a dark secret about her, but Kathmiya doesn't know what it is (though I feel it is fairly obvious).  Honestly, Kathmiya made this book drag for me from the middle to the end.  I started skimming all her sections because she annoyed me so much.

I wish there had been more Omar in the story as the children all grew older.  He was just the sort of solid, kind and understanding person everyone wants around.  Exactly the sort of friend I'd want- especially as he seemed always to have an excellent Khalil Gibran quote to share when things got tough.

Overall, I enjoyed learning more about Iraq and the Middle East through this book, but I definitely started skimming quite a bit in the second half, and I never warmed to Kathmiya.

This review is based on an advanced reader's copy.  I received this book for free to review.
Musings by Aarti at 12:46 AM