Review: Bone - Out From Boneville 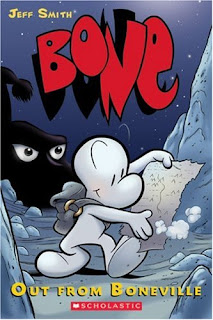 Jeff Smith's series of graphic novels begins with this one, Bone:  Out From Boneville.  In it, Fone Bone, Phoney Bone and Smiley Bone have been kicked out of Boneville after a mayoral race picnic gone wrong.  They get lost in the desert, and after a herd of locusts separate them, Fone Bone is left on his own in a lush green valley that is home to talking bugs, a giant dragon and very ugly and stupid rat creatures that want to cook him into a quiche.  Fone Bone makes friends easily, though, and soon is at home in the valley, though he still wants to find his cousins and he misses Boneville (a city that, strangely, no one else has heard of).  But he's always on the lookout for his cousins, and he's always just one step ahead of trouble.

I read this as my second book for the Graphic Novel Challenge.  To me, Bone is the traditional graphic novel story.  It's aimed at a younger audience, combines fantasy and realism, is fun and full of adventure.  While I have really enjoyed the two graphic memoirs I've read previously, it was fun to read something that was more what I think "normal" (yes, I know that's a loaded term to use, Ana!) in terms of graphic novels. 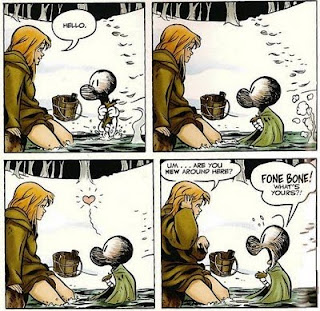 I enjoyed Out From Boneville, but it is very obviously the first book in a (long) series, and so I didn't feel completely satisfied by it.  I have heard a lot of wonderful things about this series, but I personally think I'll only feel invested in the series after reading another few volumes of it.  So hopefully, I can get my hands on volumes 2 and 3, at least!  I enjoyed this book, but as it's the first in a series of nine, it felt unfinished to me.  How did the dragon and Gran'ma know each other?  Why does Thorn have bad dreams?  What is going on with the rat creatures?  None of these questions is resolved in this book- instead, this only really concerns Fone Bone finding his cousins, and builds up a lot of questions for the next books in the series.

But while I wish that I had a better idea about the over-arcing storyline from this first volume, I really enjoyed the comical (pun intended) aspects of it.  This is a cute story!  I love that Fone Bone tries to talk Moby Dick with everyone puts them to sleep.  I love the bumbling humor of the rat creatures.  I think Fone Bone's crush on Thorn is adorable.  And it's just so fun to see the way everyone interacts.  The characters are so fun and the way they interact is very sweet; I can tell that as the series continues, the depth of each individual and of the story overall will get more and more impressive.

I don't really have much else to say about this book!  It was a fun read, and I look forward to more in the series, and that's all :-)

Note:  I have since gotten a one-volume edition of the Complete Bone series.  So I plan to read the rest of this story soon!
Musings by Aarti at 12:03 AM