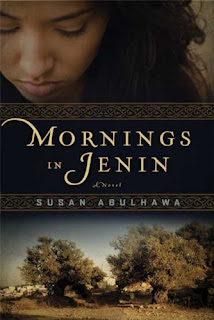 Mornings in Jenin by Susan Abulhawa follows a Palestinian family from just before WWII to 2002.  It centers around Amal, a girl born in the Jenin refugee camp in the 1960s and is profoundly affected by the Jewish attack on the camp in her childhood.  Her father never returns, her mother goes insane, and her brother joins the resistance movement.  Amal is sent to an orphanage for schooling and then is given the opportunity to attend college in the US.  She rejoins her brother and his family in Lebanon in the early 1980s and falls in love.  When war again seems imminent, a pregnant Amal leaves Lebanon for the US and her life, and the lives of all those close to her, are altered completely by what follows.  It is only decades later, when Amal returns to Jenin, that her life comes full circle and she has the chance to be at peace.

This book is very intense.  It makes no pretense at being a neutral novel.  Abulhawa is Palestinian and proud and she firmly believes the "inescapable truth that Palestinians paid the price for the Jewish holocaust.  Jews killed [her] mother's family because Germans had killed [theirs]."  However, I feel that the individual Jewish characters in this book are portrayed in a positive light.  Readers can sympathize with them.  As a group, however, of nameless soldiers and political leaders, they are presented very negatively.

I am no expert on Israel and Palestine.  I do not take a side in the debate, but I do think that Americans get a very one-sided view of the situation that heavily favors Israel.  Therefore, while I think this novel has gotten a lot of backlash about being "one-sided" and very "anti-Jew," I don't see that as a negative.  Personally, I think it's pointless to write a neutral story about such a charged topic.  I would rather read one very strong, pro-Israel novel and one very pro-Palestine novel than read two books that cover the topic neutrally.  It is not a topic on which one who is heavily involved can feel neutral.  So I welcome this very passionate and strongly-worded book because it gave me pause to think and to consider, and to adjust my views of the world.  Any book that does that is worth reading, I feel.

It is hard to write a review of this book without me feeling that I am presenting myself as anti-Semitic.  I hope those who read it realize that I am nothing of the sort.  It is very important to me that people separate religion from political entities. I see Israel as a political entity, not as a symbol of Judaism.  Just want to make that clear.

Everyone knows that millions of Jews were killed in World War II.  An appalling and staggering number that we can't even contemplate because it ignores the personalities, the potential, and the possibilities that all those people and their would-be descendants could have contributed to the world.  For much of this annihilation, the Western world sat back and averted its eyes.  This caused a huge amount of guilt after the full effects of Nazism came to light, and so one of the United Nations' first acts was to create the state of Israel.  They did this by taking land from Palestine and giving it to the Jews.  This, obviously, did not sit well with Palestinians, or the rest of the Arab world.

Chaos, as they say, ensued.  And ensues to this day.

Mornings in Jenin is a novel that confronts many, many issues but the one that stood out most to me and made my heart ache was the idea that the creation of the state of Israel took away the culture and history of an entire Middle Eastern people, in retaliation for a horrific act that was done to them by European powers.  Note that no one in Europe volunteered to give Jews parts of France or Germany or Poland- they conveniently offered up land that was farther away (and holy to three different religions worshiping the same god in conflicting ways- the achingly ironic facts just keep piling up).

He looked on in silence at the proof of what Israelis already know, that their history is contrived from the bones and traditions of Palestinians.  The Europeans who came knew neither hummus nor falafel but later proclaimed them "authentic Jewish cuisine."  They claimed the villas of Qatamon as "old Jewish homes."  They had no old photographs or ancient drawings of their ancestry living on the land, loving it, and planting it.  They arrived from foreign nations and uncovered coins in Palestine's earth from the Canaanites, the Romans, the Ottomans, then sold them as their own "ancient Jewish artifacts."  They came to Jaffa and found oranges the size of watermelons and said, "Behold!  The Jews are known for their oranges."  But those oranges were the culmination of centuries of Palestinian farmers perfecting the art of citrus growing.

The above is not true- the Jews do have history, but they were driven out of so many places that they did not have a communal sense of home.  That is a painful and disturbing fact on its own but does not negate the very real sense of loss the Palestinians felt when they were evicted from their homes.  And to me, this book is really an acknowledgment of that loss and pain.  It is not politically correct.  It is not neutral.  It is raw and bitter and angry.  And it makes you realize that news reporting often ignores nuances and motives and desperation in the cut and dry way of reporting bombings and battles and masscares.  Mornings in Jenin brings those circumstances to light, and treats them with respect.  You may not like it, but you will be affected by it.

Abulhawa has written a highly charged novel, and I think she does it in beautiful language.  There are gorgeous turns of phrase here, and sentences that really stood out to me.  One character "had the sad dignity of a man resigned to eating alone at a table set for five."  Another's wrinkles "had carved her skin like prison bars, behind which one could discern the perpetual plaint of something grand and sad, still alive and wanting to get out."

Stylistically, I was bothered a bit by the many (seemingly arbitrary) changes in tense, point of view and person.  One section would be in third person past tense from Amal's point of view, and then we would shift without notice to present tense first person from her brother's perspective.  This was annoying.  I do not understand why so many authors recently seem so enamored of the present tense, and of changing tenses in their writing, but I am not a fan.  It was jarring sometimes to scramble and determine whose point of view I was following.

That said, I am very glad I read this book.  Much like Black Hills opened my eyes to Native American history and took me on a mad dash to the bookstore to find books around that subject, Mornings in Jenin brought the Israel/Palestine conflict to light for me, and made it much more human than it's ever been before.  I look forward to reading more on the subject.  Any suggestions?

This book was previously published under the title The Scar of David.

I received this book for free to review.
Musings by Aarti at 9:37 PM