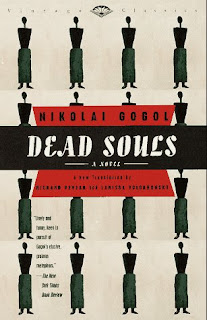 Dead Souls, by Nikolai Gogol is one of the first Russian novels.  It centers on a man named Chichikov, who comes into a town, makes friends with the officials, and then visits the surrounding landowners, asking them somewhat incongruously if he can buy "souls" (serfs) from them- but only the dead ones.  By purchasing large numbers of people that he does not actually have to transport or care for, Chichikov hopes to cheat the census system and qualify as a landowner.

This is the general plot of the story, if it can be called that.  However, Gogol rarely sticks to the general plot, taking off on hilarious tangents of describing coachmen, ornery old women, tight-fisted landowners, self-important government workers and all sorts of people in between.  His narrator goes off on asides describing the scenery, obscene amounts of food, and making commentary on the state of Russia and the world.  The plot is not in any way central to the story.  It is there only as a vehicle to get across Gogol's other points.  And those are what make the book so funny, so fascinating to read.  So that you don't even mind that the story ends abruptly, or that Part II is comprised only of bits and fragments that do not fit together.  You just continue reading, hoping for another character to get skewered.

I read this book in a long-distance classics book club with my friend Sudha, who lives in St. Paul, MN.  We next plan to read The Tale of the Genji (the short version).  Below are our thoughts on Dead Souls.


What stood out in the book to you as its strength?  And as its weakness?

Sudha:  Nikolai Gogol is an artist in personality. Even his minor characters have depth, and some of them have the added random benefit of being the butt end of one of the narrator’s monologues.  My particular favorite character is Chichikov’s charioteer/servant/serf, Selifan.  Some of the best sarcasm comes from when Gogol first describes Chichikov’s servants, but breaks off abruptly, because he “does not like to engage [sic] the reader’s attention in connection with persons of a lower class than himself.”  This rant here, one of many in Part One, shows a Gogol both deeply frustrated but weirdly proud of Russia’s convoluted class system.  These rants give the reader a glimpse of 1800s Russia through Gogol’s slightly wonky lens with a hilarious result.

Dead Souls’ weakness, even in Part One, would be the loose or missing plot. The reader eventually gets the idea that Chichikov is trying to increase his status to landowner by owning the “dead souls” of serfs, but the Homeric journey he takes from estate to estate is far more fascinating than wondering what is going to happen next.  I definitely got caught up in the landscape and characters and nearly didn’t pay attention to what was actually happening.  Drunk coachmen who swear, wayward horses, sinister landscape, old women who like to sell goose fat, all way more interesting than plot.  Part Two, obviously, is incomplete, so the plot goes to hell in a handbasket for about 150 pages and ends midsentence.  According to the ever accurate and trustworthy Wikipedia, some Russian lit scholars believe that there never was supposed to be a Part Two.  Gogol just liked to end his stories on cliffhangers to increase interest in his writing, the sneaky monkey!

Aarti:  I think Gogol was really really good at writing & describing characters.  He could really turn a phrase and present a very vivid picture in your mind.  For example, during a conversation, he describes someone's facial expression as so:

Here Manilov, with a slight motion of his head, cast a very meaningful look at Chichikov, all his features and his pursed lips taking on an expression of such profundity as had perhaps never before been beheld on a human face, except perhaps for that of some excessively clever Minister of State, and even then at a moment of the utmost mental exertion.


I have a very clear picture in my head of how ridiculous Manilov must have looked.  And that happened throughout the story.  Gogol had a very keen eye for detail and he obviously was very aware of the intricacies and hilarities of human interaction.  That came through really well in his characters, who were more often than not more caricatures than anything else.  Gogol had a very strong grasp on characters, and I think that is why he excelled so much at the short story format.

Obviously a weakness in the story is that it's unfinished (or finished but partially burned or whatever the case may be).  There were a lot of pieces missing in the second half that made it impossible to keep track of anything resembling a plot.  I was basically just reading for the conversation and descriptive passages, as I do not have a firm grasp on everything that happened in Part II.  I suppose I can't list that as a weakness, so instead I'll say that sometimes it seemed that Gogol was so wrapped up in description that he lost track of the plot.  I loved his character descriptions for their satirical value and obvious wit, but I didn't need such in-depth knowledge of every minor character in the novel.  And often he would just veer into side stories (like the entire story about the peg-legged soldier from the Napoleonic wars) with no real reason.  I don't think the story was as cohesive as it could have been, particularly as Part II had almost nothing to do with Part I and could have been a completely different story.


At many times during the story, the narrator seems to justify to us why Gogol is sharing this particular story.  Why do you think Gogol did this?  For readers or for critics?

Sudha:  Both, I would say.  However, I think Gogol’s hardest critic was himself.  One of the best quotes I have read about Nikolai Gogol describes him as “experiencing his life as art,” and therefore taking his mood changes and temper out on his work.  These rants we read in Dead Souls, that we praise as Gogol’s finest writing, are also insights into the author’s mind.  I think Gogol keeps justifying his stories in order to justify his art to himself.

According to the intro of my book (Richard Pevear and Larissa Volokhonsky’s translation) Gogol later became rededicated to his Orthodox faith, and as a result, threw much of his work into the fire.  Experiencing his life as art nearly destroyed his work and almost deprived the world of his literary influence.  His rants seem directed to him, almost as a punishment for having the audacity to create art.

Aarti:  I asked this question and I don't even really know how to answer it.  I feel like readers of this book are really hit over the head with the narrator's tirades.  I am not sure why Gogol chose a novel to silence what he deemed were critics of his school of thoughts.  Why not write an essay in a journal?  Why not write letters?  Why not just let the story speak for itself without inserting yourself into it?  I suppose at this time the novel was a relatively new format, and the Gothic horror-romance was still very popular, with a virtuous lady being saved from evil by an honorable "man of worth," as Gogol would say.  And obviously, Gogol wanted to turn that on its head.  He used everyday, small occurrences with average, normal people as his characters to tell a story that still delivered on big, all-encompassing themes.  But why did he have to tell us that he was doing that?  I appreciate the effort because the narrator was clearly a very defensive and somewhat pretentious person, but I am not sure what Gogol's motivation for including the narrator was.  I got the feeling it was more directed towards his critics than readers, and I am sorry for it because I think if he had just written the story without all these asides, people would have understood his goals without him directly referring to them.

Reading a work in translation is always a little strange. How was your translation, and do you think it was true to the original work?

Sudha:  Richard Pevear and Larissa Volokhonsky’s was excellent. This team captured the sharp beauty of Gogol’s prose while keeping the breadcrumbs of absurdity at the same time. I really like that they kept as many idioms as they could while making the syntax sensible for English readers.  I have read many different types of books translated from Russian to English (examples: Dostoevsky’s “Crime and Punishment”; Sergei Lukanyenko’s “Night Watch”) and I can definitely say that translated Russian can be very difficult to read. While I have not read other translations of Dead Souls, I would recommend this one, if only for the fact that the word “snookums” makes it into the text in a conversation between Manilov and his wife!
Aarti:  I read the Oxford World's Classics version, translated by Christopher English.  I don't know if it was true to the original work, as I don't read Russian, but I really appreciated all the footnotes for character names.  Gogol was very big on naming his characters in very symbolic ways, and I appreciated that the translator kept those instead of trying to get the point across some other way.  I also thought the story was very natural and easy to follow, so in that way, I think the translator did very well.  However, I am a bit depressed as "snookums" was not in my translation at all!  Sigh.  We can't have it all,  suppose.
Musings by Aarti at 12:00 AM