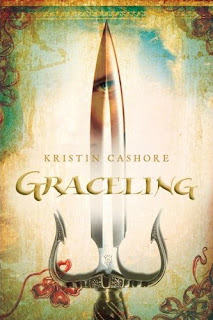 Plot Summary:
At a young age, Katsa's eyes changed colors- one to blue, one to green- and marked her out as Graced.  The Graced are people with special, enhanced abilities to do certain things.  Katsa's was to kill people; her Grace first showed itself when she slammed the nose of a man into his face and killed him.  Since then, she's been the royal thug to her uncle the king, traipsing around his kingdom threatening people and breaking bones or doling punishment until they comply.  She also runs a secret underground resistance network, The Council, through which she helps people fight the corrupt governments of her world.
On one mission, she meets Prince Po, a foreigner who is Graced with fighting skills and who has an uncanny knack of knowing her thoughts.  They become friends, and then set off together on a quest, ostensibly to save his grandfather, but really to fight a corrupt king and save a young, innocent girl who will be queen.
I know I'm one of the last to this party, so I wasn't even sure I should review this book.  But I review every book I read, so here we go!

I think for me, this book was probably a victim of its own success and my expectations.  I really liked it.  It held my attention throughout, its characters were engaging, and I enjoyed the fantasy world it presented to me.  But it just wasn't as good as I expected it to be.  People rave about this book!  It is on countless "Best of 2009" lists and I have seen so many reviews praising it to the skies.  And it's unfair of me to expect more from a book just because I've heard it's good.  But, I must admit, I expected this to blow me completely out of the water.  And it didn't.

It's a fairly typical epic fantasy novel, with a hero (or in this case, a heroine) setting off on a quest, through dangerous terrain and surrounded by people she can't trust.  It's also a very believable and quiet romance.  I have a niggling feeling that if I had read the book without any expectations, I'd like it a lot more.  But I went in with a vague idea of Graceling having a huge, shattering impact on me and it did not deliver that.

What it did deliver was a very solid female lead.  I could see Katsa becoming a Mary Sue if this series were to continue (but thankfully, the other book in this series is a prequel revolving around a different character entirely), but in this story I found her easy to empathize with.  She is a woman who knows herself, who is confident in her abilities and who doesn't suffer fools.  She is more afraid of losing her self-reliance than she is of anything else.  And when people treat her like a dainty little thing, she gets angry, but often her thought process behind the anger is lucid and makes sense.  I appreciate that.  And even though she wasn't a lead character, the Princess Bitterblue was also a very convincingly real and respectable female.  I am thrilled that there were no women in this book, actually, that annoyed me.  All of them had common sense and good heads on strong shoulders, and I loved it.

I also liked the male characters.  Prince Po was three-dimensional and had a wonderfully vulnerable side.

I guess in that way, I'm not sure why this one just didn't grab me the way I expected.  It was an excellent story with great characters, but I didn't think the world was as fully developed and fleshed out as it could have been.  I am a sucker for hearing about history and religion and the like in fantasy novels (especially in epic fantasy) and this book didn't have any of that.  It was set firmly in the present and we aren't given much in the way of filling in the blanks.  I would have enjoyed a deeper understanding of the world in which the story was set.

That said, though, I think this is a great book!  It is a quick and engaging read with strong, likable characters, and I'm glad I finally read it!  I hope that Fire is even better!
Musings by Aarti at 12:00 AM