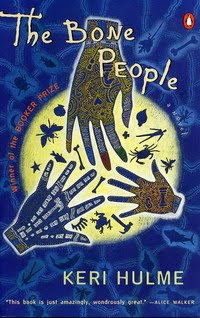 
First published by Spiral Publishing in 1984.


Plot Summary:
Kerewin lives alone in a large Medieval tower she constructed on the coast of New Zealand's south island.  One day, she finds an intruder in her library, a young mute boy named Simon Gillayley.  He spends the night at her tower, steals from her, and then comes back to give her a valuable gift.  This starts off a deep and meaningful friendship between Kerewin, Simon and Simon's adoptive father, Joe.  The three become fast friends, spending a great deal of time together and understanding each other in ways no one else can.  Then Kerewin finds out that Joe beats Simon- almost without mercy.  This involves her in the lives of the Gillayleys more than she'd like and soon she finds herself as almost a third member of their strange family.  And then something happens that affects them all and drives them apart, each to confront their own personal demons.  They can only be together again when they come to terms with their actions and the impact the triple relationship has on each of them.


My summary above does absolutely no justice to this complex and deeply moving story.  It is difficult and painful and emotional and amazing.  I highly recommend reading it but I also highly recommend reading it with someone else.  It is much easier to deal with the horrors of the story when you can discuss them with another person.  I was lucky enough to discuss them with one of my closest book blogging friends, Zibilee from Raging Bibliomania.  I'm so glad I did because discussing the book in so much detail with her added a lot to my enjoyment and understanding.  In fact, even now we're still discussing it over email.  Reading is such a solitary activity, so it's nice to once in a while get that discussion and reflection aspect back.  Especially with someone so great!

1.  A lot of people (including us) were very intimidated before reading /The Bone People/ due to its odd writing style and grammar.  Do you think you got used to this eventually?  Do you think Hulme's way of writing added to or detracted from the book?

Zibilee:  I think the biggest thing I have heard over the years about this book is that it is difficult read. I wasn't sure if people were referring to the style, subject matter, or dialog, but I have to admit that I was really very intimidated when I started the book, and for most of the first section it took a lot of effort for me to really be able to digest the story properly and get into the groove of things. As time went on, I got used to the heavy word play and the unusual style that Hulme uses throughout the book, but I never really got used to the way she interspersed the Maori language into the text, and as we had discussed previously, having to go and look up words in the incomplete glossary at the back of the book did disrupt my reading a bit. I felt that Hulme took a lot of liberty in the crafting of her story, and there were parts that were really hard for me to follow. Some of the narrative read like a dream sequence, with very visceral and shadowy imagery, and at times it was easy to get lost in what could only be the characters personal cogitations. So, yes, I do think at times the writing was intimidating, but overall, I was able to hang on to the flow of the story and ended up being greatly rewarded. I was really glad that I stuck with it , because it was a remarkable story that really hit me like a rock and forced me through some really raw emotions. I wouldn't really say the writing style detracted from the story, but it did force me to pay much closer attention and to read a lot more slowly than I usually do.

Aarti:  I completely agree.  I am not sure why I was so intimidated to read this book- meaning, I don't know where I first got the impression that it would be really difficult to get through.  But I think the intimidation was justified because, like you, I found the writing style very hard to get used to at first.  I often wouldn't know whose head we were in at what time, since it seemed that the point of view would switch from one to another pretty quickly.  Also, now that I think about it, there aren't many instances of the phrase "s/he said," so even during conversation sometimes it was hard for me to sort out who was saying what, especially considering Hulme's creative use of paragraphs.

I agree about the Maori language.  I wish there was a more complete glossary in the back, or that there were context clues as to what the words meant.  I have always been one of those people who has to know what EVERYTHING means exactly, though, so I'm not sure this would bother other people as much as it bothered me.

I also feel that once you get used to the writing style, the book really rewards you for it.  Once I understood Hulme's use of line breaks and spelling and paragraphs and characters' inner dialogue, then I was really overwhelmed by how much Hulme could do with her words.

Zibilee:  I think this is a really interesting and introspective question. I think that Hulme really intended for the book to ultimately be a story that concluded in hope, but the fact is, for me, the story was just so frightening and ambiguous that I couldn't really end up feeling that way about it. It was at times so, so brutal and although things were patched up nicely in the conclusion of the story, I think it would be really naive of me to think that things could ever be as simple as that. Part of my hesitation in being able to see the more hopeful aspects of the story come with my cultural and moral beliefs being very different from those of the characters in the story. They had a very different way of thinking and reacting, indeed of even expressing themselves that was so foreign to my own that it made it hard for me to accept that they could have ever been happy and accepted the things that had happened in their past, and that they could have moved on towards happiness and hope. So, in essence I could answer this question in two parts: I think that it was a very sad book, but I also think that the author didn't really intend for it to be. The best way for me to describe how I felt about it was the book would have to be bittersweet, with an emphasis on the bitter.

Aarti:  We discussed this at length together, and I agree with you wholeheartedly.  I did not end the novel feeling that things would be fixed and better for all three characters.  I ended it feeling that they had maybe found a way to be together and that they were comfortable with that, but not necessarily happy in a long-term manner.  This reminds me of a conversation that was on Twitter recently about happy endings in books and what a happy ending really is.  I think that for a book to have a happy ending, I as the reader need to feel comfortable about where the characters end up and where they'll go in the future.  It's not a happy ending in my opinion just because the girl ends up with the right guy or because the villain is defeated.  This book really exemplifies my somewhat non-traditional view of happy endings.  Like you, I think Hulme really gave it a hopeful and happy ending by her point of view, but personally I have no real faith in the characters being able to make that happiness last.


3.  What do you think were strong and weak aspects of the book?  Characters?  Setting?  Plot?  Narrative voice?

Zibilee:  I definitely think that the narrative voice and the characters were the strongest parts of the book . For that matter, I think they actually made most of the book for me. The narrative voice was very clear and didn't feel labored at all to me. In fact, at times it was so stingingly clear as to seem merciless in its delivery of the tale. It was curiously detached yet vehement. The setting was not something that I was overly focused or concerned with, yet it lent a lot of credibility and a curious force to the story, so in my opinion, it was one of the stronger aspects as well. I also thought the plot was pretty strong. It wasn't a simple story by any means, and the winding tension of all the elements of the story coming together into sharp focus near the end of the book was really quite astonishing to read. I think, if I were forced to find the weakest section of the book, it would have to be the same things that I have mentioned before: the excessive word play and the sometimes unfocused and tangential quality of the writing and Hulme's habit of injecting the narrative with so many non-translatable quotations in Maori.

Aarti:  I agree.   I think this is a very  character-driven plot.  We are never in anyone's head but Kerewin, Joe or Simon.  That makes us reliant upon them for the story, rather than being able to trust in a narrative voice or someone from outside the story.  I think the setting was really important in this story, particularly for Kerewin.  She lived in a huge, lonely stone tower that didn't even have heat.  She hunted her own meat and grew all her own vegetables, she administed her own home-made medicine.  She clearly is the sort of person who doesn't need to rely on anyone.  In contrast, Simon has to rely on so many people, him being mute and only able to communicate with people who can understand his rapid-fire hand gestures.  His inner voice, to me, was so fascinating- It really hit me that there were so many words he didn't know and didn't have access to using to convey his thoughts and feelings.  I definitely thought that the characters were the strongest part of the story.

As for the weakest, even though this is my question, I don't know what the answer is.  I sometimes think that Hulme tried too hard to convey as much through her use of words and her placement of them on the page.  I would read something and then feel a slight panic that maybe I had missed something major in the spelling of a word or the way it was pronounced or who was thinking it.  It would have been nice to not have to worry about that quite so much.

Now check out Raging Bibliomania for the rest of the review!
Musings by Aarti at 12:00 AM