Some months ago, I read and reviewed the book The Order of Odd-Fish by James Kennedy, a young adult fantasy novel about a girl who finds out she has to save her new home town from the wrath of the All-Devouring Mother goddess.  It's a fun book and has quite the cult following online!

This cult following is, I daresay, mostly due to the personality of James Kennedy himself.  Once you watch him act out a scene from his book, it is very hard not to want to read the book yourself.  And when he also has impressive fights with Neil Gaiman, it's no wonder that people are picking up this book and taking notice.

They are also showing their support and true fangirl/boy status.  How?  By brewing Belgian style beer. 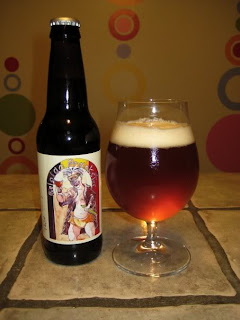 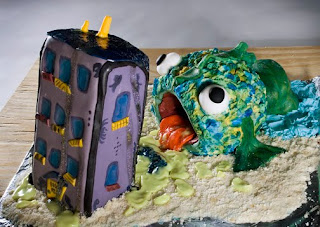 By immortalizing cockroaches in stained glass: 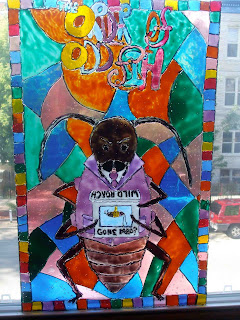 But mostly by sharing their creative powers with Kennedy in their Odd-Fish art.  It's the coolest of the cool when a story can inspire people to create art themselves.  And Kennedy has done a brilliant job of giving credit to people who love his book and support his work by creating fan art.  He's going further than most authors do, too, to promote his book and thank his fans.  He's having a whole party to celebrate!  As Kennedy says,


It'll be not only an art show, but also a costumed dance party and theatrical extravaganza. I'm working with a Chicago theater group called Collaboraction to do this. They're going to decorate their cavernous space to portray scenes from the book (the fantastical tropical metropolis of Eldritch City, the digestive system of the All-Devouring Mother goddess, the Dome of Doom, etc.).

Opening night will be a dance party where people dress up as gods and do battle-dancing in the Dome of Doom. In the weeks afterward, we'll bring in field trips from schools. They'll browse the fan art galleries, be wowed by the elaborately decorated environment we've created, take in some performances from the book, and participate in an energetic writing workshop.


A costumed dance party and theatrical extravaganza?!  Gosh, I love Chicago's literary community.  So creative and willing to break down the barriers between the arts.

If you're in Chicago and you want to attend, here's the information.

And if you're not in Chicago, but have read and enjoyed The Order of Odd-Fish and have artistic impulses, feel free to send your art to James Kennedy and rest happy knowing that in April, Chicagoans will dance a merry jig in bizarre costumes around it and pay homage to the book and your art in a theatrical extravaganza.  Pretty sweet deal, isn't it?  Just be sure to submit by March 15th to ensure you get your place of honor in the show!
Musings by Aarti at 2:50 PM