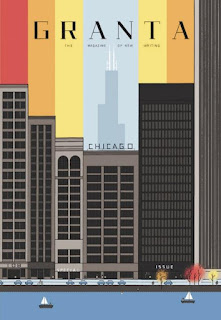 Granta, a literary magazine, came out with an issue featuring Chicago in all its glory in October (see gorgeous art deco cover art to the left).  I do not get this magazine; actually, I've never read an issue.  But I like it based on principle alone.  What a lofty goal, to devote a magazine to new writing across genres!  I love it.  And honestly, I love anything that showcases Chicago.  We Chicagoans have a lot of local pride (possibly misplaced, but it's hard not to adore a city with such a gorgeous skyline, good food and friendly people).  So when I heard that Granta was devoting an entire issue to the city (only the second time in its history it's done something like this), the magazine got on my radar and rose immeasurably in my esteem.  I now read its online content fairly often.

And once you get inside the (online content of) the magazine, it's also very good.  The magazine features short stories about people living in the city, the city's personality, and how things work here.  But as its stories are being told by fantastic authors, even the gritty seems so poetic.  For example, Richard Powers wrote a short piece on Chicago officials' ability to ignore problems until they get very big, public and embarrassing, but he adds a light touch of humor to his piece:

...the sixty miles of twisting passageways are still down there, awaiting their accidental rediscovery by some unwitting private company half a century from now. Until then My Kind of Town stands ready again for any fresh elemental disaster, forever bareheaded, shovelling,wrecking, planning, building, breaking, rebuilding… Okay: maybe a little light on the planning.

Another story comes from Sandra Cisneros of The House on Mango Street fame.  She writes about growing up Mexican in Chicago, about parents who don't understand each other, who don't communicate with their children through words.  It is poignantly sad, but ends on a beautiful note of gratitude:

I understood Father. He understood me. Neither of us understood [my mother], and she never understood us. But that didn’t matter. A stack of pancakes. A pay cheque. A bouquet of dandelions. A ride to the Garfield Park Conservatory. A box of popcorn from the Sears. A language for the things we couldn’t say.

There's something really wonderful about a woman who makes a living out of words admitting that some things just can't be expressed in language.

And author Dave Reidy (who I get to meet on Monday!) touches on that odd aspect of urban dwelling- recognizing and feeling somehow connected to the lives of complete strangers.  People you recognize and see very regularly, but never interact with, except in your mind.  In his story, "Chasing Cars," Reidy takes the perspective of a man who sits across from an auto body shop and feels very concerned about the well-being of a younger man who works there.

Tonight, just before seven, the kid hasn’t come out yet. Is he off sick? Did a cab dispatcher call the body shop and get the kid fired? What if he went out the back door and forgot to lock the front? If somebody were to show up tomorrow and find the door unlocked, he’d be fired, for sure.

The narrator obviously is worried about the younger man, about not only his life but his career prospects.  As someone who often sits on the El or on a bus, mulling about the lives of the people around me, I can completely relate.  Reidy captures the strange push and pull of intimacy and isolation in urban living very well.  It's so easy to go through city living feeling as though you don't know anyone around you.  But it's also easy to feel very wrapped up in the lives of people you share the bus with or that you see through a window in a well-lit room.

And then there is the story "Mr. Harris" by Tony D'Souza which hits on the racial tension of Chicago living:

This story really hit home for me.  I think much prejudice is based on race, but more on race coupled with economic status than just race alone.  D'Souza makes the connect between race and economic status as well:

I knew Mr Harris couldn’t come to our house in Park Ridge in that beat-up car of his without getting one of our neighbourhood cops on his tail. I knew he couldn’t come up where we lived without getting arrested. Because a black man in a tattered suit had come to our door soliciting once when I was young. My mother had told him ‘no’ and looked out the drapes at him as he left. She said to me, ‘He’s not going to make it three more doors before they call the police on him.’ Ten minutes later we heard the sirens and when we went out to look, they were handcuffing him up against the trunk of an oak tree while all the mothers and their kids stood in the doorways to see.

In contrast to D'Souza's story, Dinaw Mengestu's "Big Money" (probably my favorite of the stories available) touches on the life of Chicago from the perspective of an African-American.

Despite its size and diversity, I thought of the city as provincial; as a place of tight, confined borders from which people rarely ventured, and where a distinct brand of Midwestern racism and ignorance lived and thrived...I had been called a nigger dozens of times in high school, and with bigger, and meaner, friends taking the lead I had later gone out of my way to frighten young white couples walking along the lake shore. And while of course I knew at the time that none of this was unique to Chicago, I was convinced that the city itself was somehow guilty of creating at least some of the anger and contempt I often felt, if only because there had to be something more specific than human nature to blame.

Mengestu talks about returning to Chicago after some years in New York City, and how his perception of the city, of the "blue collar workers" and of his father changed while he was back home.  His story is told in gorgeous prose, and I highly recommend clicking the link above to read it.   It is a story about family, the city, immigrant life and the Chicago Cubs. 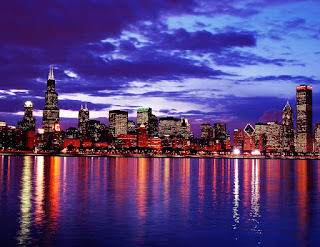 I love that there are stories that so unflinchingly face and display the double standards, the unfairness of living in America, from all angles and all cultures.  D'Souza's story is a great example of that.  But there are also stories about reverse discrimination, about the nasty side effects of affirmative action, and all the rest.

Those are just a few of the stories out of Granta's Chicago issue that struck a chord with me.  There are several stories available from the Chicago issue here, and from the magazine, overall, here.  I just wanted to share my thoughts with you on the magazine, the stories, and my imperfect yet beloved city :-)
Musings by Aarti at 9:00 AM