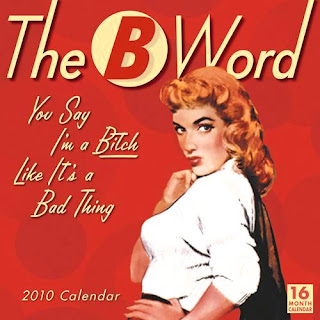 This post really has nothing to do with books, but it relates somewhat loosely to the Women Unbound challenge.  It started when I was watching Top Chef last week and one of the contestants said something about being a b*tch and that she was happy to "own that word."  What?  Who are you?  Why would you ever want to "own" that word?  How are you happy to be associated with it?  Then there's the picture with this post...

And now I'm reading Helen Hollick's excellent book The Kingmaking, and the book is just littered with the word everywhere- however, at least in that book, it's used very much in a derogatory sense and no one is happy to be the recipient of the term.  That is fine with me- I don't think it's something you should like being called.  I would be highly offended if someone called me that.  And I'd be mortified if I had done something to earn the term.  But I seem to be in the minority.

Really, what is with women today being so proud to be called the b-word?  I don't know when being associated with a word that means rude, aggressive, mean and all-around horrible became a badge of honor.  But it seems more and more to me that women use the word and don't apologize for it.

And then I got to thinking about how many people feel the word feminist has a negative connotation.  And that maybe these are related.  I feel like the term b*tch has become, for some, synonymous with "feminist."  This is upsetting and disturbing.  Feminists are assertive about their rights, not aggressive about stupid, negligible things.  Feminists want equality, not to be seen as dominant.  Feminists know their end goal, but that doesn't mean they'll sabotage other people to get there.

B*tches, on the other hand... well, they do whatever they want and don't seem to care for the consequences.  And I think for many people, when they hear the word "feminist," they think of the word "b*tch."  Because they think of really aggressive, spoiled women who go after what they want, regardless of how it may affect other people.

I understand that language evolves as the use of words changes.  Maybe the b-word has a stronger connotation for me than it does for other people who use it so loosely.  Personally, I rarely ever swear or cuss (I can't even type out the b-word on this blog).  And so when I do, each word really means something to me.  And when I hear a word that has such a negative association, and when I hear women cheerfully referring to themselves by that word, it really gets on my nerves.  Being a b*tch is not cool.  It doesn't mean that you value your independence or that you are willing to make sacrifices to get where you want to be in life.  It means you are manipulative and crafty and not the sort of person anyone wants to be around.  Why in the world would you ever want to own that word?

What do you think about this?  Am I being overly sensitive?  Am I making random and baseless connections between the increase of the usage of the b-word and the negative view people have of the word feminist?
Musings by Aarti at 2:33 PM