Review: The Order of Odd-Fish 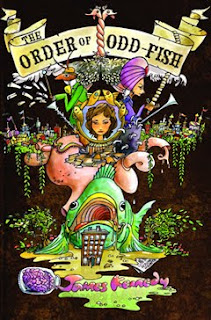 Title:  The Order of Odd-Fish

Jo Larouche lives with her elderly, former actress Aunt Lily in a ruby palace in California.  She has no friends and no excitement in her life, and her aunt is very peculiar.  All Jo knows about her past is that she was found in Aunt Lily's washing machine one day soon after she was born, with a note attached to her saying that she was a very dangerous baby.  She does not, however, feel dangerous.

On the day of Aunt Lily's Christmas party, a large Russian gentleman arrives at the Ruby Palace with a giant butler cockroach, saying that his digestive system has told him that he must protect Jo from Ken Kiang.  He also has a box for her from The Order of Odd-Fish.  Ken finds them, Jo and her friends escape in a plane only to be shot down and eaten by a giant fish, which eventually spits them up on the shore of Eldritch City.  There, Jo learns that her aunt, the Russian and the cockroach are all members of The Order of Odd-Fish, a knighthood dedicated to the pursuit of useless and often baseless rumors and conjectures.  Jo herself has a history with the knighthood and Eldritch City.  After making friends with some squires, going on some quests, hiding from the Belgian Prankster and fighting a duel, Jo realizes that she must face her past and help save Eldritch City from the ravenous hunger of the All-Devouring Mother Goddess and her cult of Silent Sisters.

I read this book because I put together a Young Adult author panel discussion for the November opening of the Open Books store.  Kennedy is one of the authors attending and I thought I should read their books, if possible, before meeting them.  Luckily, I know someone who has a copy of his book and she let me borrow it, saying that his writing style is similar to Norton Juster's in The Phantom Tollbooth.  I'm pretty much sold on any book that is similar to that one, so I was really excited to read it.  I can definitely see the hints of Juster here, and also possibly Roald Dahl.  But Kennedy certainly has his own unique style.  And the man can use alliteration better than any other author I have read ("Infamous Insect Indignantly Irked in Insipid Imbroglio").  He also has an amazingly fun and obscure vocabulary, and it's a lot of fun to read.

This book would be excellent to read out loud with someone- I bet the audiobook version is great.  I enjoyed reading it, too; the plot is somewhat ridiculous, the dialogue witty and hilarious and the characters are certainly one of a kind.  For example, Ken Kiang got so tired of doing good things that he tries to become evil.  But he isn't very good at it, so he has to try very hard, and must focus on making his laugh truly evil.  Ken is only one of numerous fun and silly characters.  The witty banter between all of them is a book highlight.  For example:


Sometimes, though, I got the impression that Kennedy was trying a bit too hard to be odd and outrageous.  Really, I feel that after you put in a 3-foot-tall cockroach butler in your story, you need not also include a sardonic centipede.  It was all done very tongue-in-cheek, but sometimes the cheekiness got a bit wearing.

That said, though, The Order of Odd-Fish is fun, frothy and full of flavor (see?  I can alliterate, too!).  Just be prepared if you're reading it- it's Nickelodeon-like in its ability to really gross you out with bodily functions and fluids!
Musings by Aarti at 5:57 PM