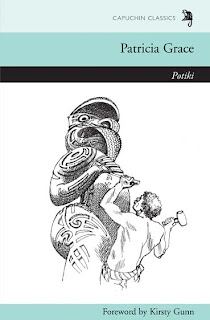 Favorite Line: It was funny how people saw each other. Funny how you came to see yourself in the mould that others put you in, and how you began not to believe in yourself. You began to believe that you should hide away in the old seaweed like a sand flea, and that all you could do when disturbed was hop about and hope you wouldn't get stood on. But of course you did get stood on.

This book qualifies for both the New Zealand Challenge and the Clear Off Your Shelves Challenge.

Plot Summary:
A Maori community on the coast of New Zealand is threatened by a land developer who wants to purchase the community property, move the community meeting hall, and construct many new buildings, including an "underwater zoo." The story is told in several chapters that switch narrators. Sometimes, it is Hemi, a man who was laid off from his job and realizes that this situation affords him the opportunity to reconnect with the land, his culture and his family. Other times, Toko is the narrator. Toko is Hemi's adopted son and is physically handicapped. However, he also has a sixth sense and can see events before they occur. Mostly, though, the story is told by Roimata, Hemi's wife and Toko's adoptive mother. She relates the growing concern the Maori have about developers coming into their land, and their quiet, concerted efforts to rebel. She details their successes and many painful failures in a sparse, simple prose. The book does not really have a true resolution; instead, Patricia Grace outlines the cultural differences that exist in New Zealand, and the uses and abuses of power, and how it can affect a people.

That was a surprisingly difficult summary to write above because I'm not really sure I "got" Potiki. There were several sections written in Maori, with additional words littered throughout the book as well. There's no glossary and there are very few context cues to determine what some of the words are. So I ended the book dissatisfied, feeling that I had missed key plot elements. I think because of my inability to understand some of the words, I also never fully developed a rhythm in my reading and thus didn't engage as well as I should have.

It's unfortunate, really, because the writing is quite lyrical in its simplicity. I think Grace really uses language as a vehicle to reinforce Maori belief systems in the "less is more" mentality. (Though she also reinforces her themes by repeating the same phrases. Over and over.) Hemi often says, "All we need is here," meaning that the people should live off the land and what the land can provide for them. Grace emphasizes a return to the pleasures of farming and building and self-reliance. It's never easy, but it's rewarding. She also tells really magical stories; from the ancestors carving to the family out eel-fishing, to the coming together of a community for the funeral of a loved one. I much preferred these folk tales and stories to the main plotline involving the land developers.

The main plotline just fell flat for me. It only came up about 60 pages into the story; as the story is only 180 pages long, this really made it seem rushed to me. Also, the story was fairly one-sided; the bad guys were really bad and the good guys were really good. There wasn't much middle ground. Additionally, I thought there were a lot of fascinating characters in the story (particularly the grandmother) that we just never got to know well. I think Potiki would benefit from being longer.

I also think, though, that Patricia Grace clearly wrote this book for a specific audience. She seems to have meant for non-Maori people (pakehas) to feel lost and out of place in the reading. That's why she inserted so many phrases that no one else can understand. She also makes it clear that she believes most New Zealanders just can't relate to the Maori thought process, about living simply and as part of the land. She had an agenda writing this book, and it comes across clear.

While I feel very strongly that I was out of my depth in many ways with this book, I did really enjoy the writing. It sets a nice tone and it's really lovely in an almost poetic way; Grace doesn't use any unnecessary words to convey her sentiment, and it was refreshing to see so much shared with the readers, so richly, in so short a book.
Musings by Aarti at 6:55 PM