Review: What is the What 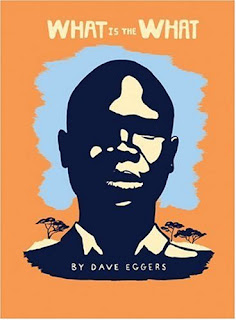 Title: What is the What

From Publishers Weekly
Starred Review. Valentino Achak Deng, real-life hero of this engrossing epic, was a refugee from the Sudanese civil war-the bloodbath before the current Darfur bloodbath-of the 1980s and 90s. In this fictionalized memoir, Eggers (A Heartbreaking Work of Staggering Genius) makes him an icon of globalization. Separated from his family when Arab militia destroy his village, Valentino joins thousands of other "Lost Boys," beset by starvation, thirst and man-eating lions on their march to squalid refugee camps in Ethiopia and Kenya, where Valentino pieces together a new life. He eventually reaches America, but finds his quest for safety, community and fulfillment in many ways even more difficult there than in the camps: he recalls, for instance, being robbed, beaten and held captive in his Atlanta apartment. Eggers's limpid prose gives Valentino an unaffected, compelling voice and makes his narrative by turns harrowing, funny, bleak and lyrical. The result is a horrific account of the Sudanese tragedy, but also an emblematic saga of modernity-of the search for home and self in a world of unending upheaval.

My friend Beth gave me this book to borrow some time ago, and it took a bit longer to read than I expected. But it was well worth it! It is marketed as fiction, but it's actually the autobiography of a man who survived the Sudanese civil war and lived in refugee camps before moving to the US. It describes the conditions of life in refugee camps, and then the difficulties faced in adjusting (or not adjusting) to American culture. I admit to an almost complete lack of knowledge about most things African- from geography to culture to history. I only have vague notions of famine, war, corruption and disease, coupled with gorgeous safaris and artwork. I don't know if Deng's story really brings to life African life as it is lived day-to-day, but it certainly puts the refugee camps in relief. It's sad to read about the marches so many people went on to reach safety, and the way temporary shelters became permanent homes. And the amount of heartbreak that follows Deng throughout his life is just terrifying- it made me realize how lucky I truly am.

I also think Deng has a very strong Christian belief in God, so if you enjoy stories of faith, this might be a good one for you. But if you are like me and do not particularly care for those sorts of stories, I don't think the religious overtones blast at you. But they're certainly there. As is complete honesty in Deng's thoughts about life in Africa, life in the US and life as a refugee. It's fascinating reading, and I think anyone with an interest in human rights would enjoy the read.

Overall, I enjoyed reading this book and I'm so glad Beth recommended it to me as I had never heard of it before! Clearly, my knowledge of Africa needs to be expanded... I'll have to work on that soon. But first, since I'm in India... I'm off to read Volume II of the massive Mahabharata!
Musings by Aarti at 2:57 AM