Review: Castle in the Air 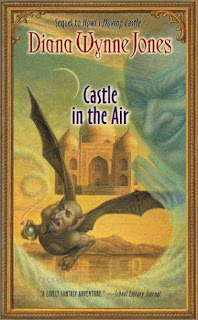 Title: Castle in the Air

From Publishers Weekly
Abdullah the rug merchant leaves his humdrum life far behind when he purchases a threadbare magic carpet from a mysterious stranger. Almost immediately, Abdullah is whisked off on a series of adventures that bear an uncanny resemblance to his own daydreams. He meets the love of his life only to have her kidnapped by a fierce djinn. With the help of the magic carpet--and an ornery genie--Abdullah sets out to rescue his bride-to-be. His travels take him to the fairy tale land of Ingary, the setting of this novel's predecessor, Howl's Moving Castle. As usual, Jones has constructed a wonderfully complicated plot, chock-full of magical mayhem. However, while her other interconnected novels ( Charmed Life , The Magicians of Caprona and The Lives of Christopher Chant ) can be read on their own, the final third of Abdullah's story is likely to confuse readers not already acquainted with the characters introduced in the first book. Those familiar with Ingary will welcome the chance to return and catch up on the doings of its exuberant inhabitants.

Wow, what a quick read! I gave up on A Separate Country around 7pm last night, and then wanted to go for something much lighter. I was also in the mood for fantasy. And since I had recently listed Sophie and Howl as two of my favorite characters in literature, I decided to revisit with them for an evening (and probably another few evenings as well, since after finishing Castle in the Air, I immediately picked up House of Many Ways). Castle in the Air is a retelling of Aladdin, spiced up with the beloved characters from Howl's Moving Castle. It is a quick, light and fun read- exactly what I was in the mood for last night. The main characters- Abdullah and the soldier- are quite realistic for cultural norms. Abdullah likes quiet and thoughtful women and dislikes animals, the soldier is grizzled and gruff. The genie, however, really steals the show with his sarcasm and self-absorption. Classic- loved it!

I didn't enjoy this book as much as I enjoyed Howl's Moving Castle. I thought that the ending was a bit rushed and whirlwind and tied up really very neatly. But to be honest, that's probably not the reason I was slightly disappointed. I was too excited, at the start, to see my old friends Howl, Sophie and Calcifer again. And then was disappointed that they did not have bigger roles. That is, they had major roles, but not in the way I expected. I would have liked to see more interaction between the three of them, but that probably would have been asking too much.
Also, I hate to say it, but I didn't much care for Sophie in this book! At least, not nearly so much as I liked her in Howl's Moving Castle- after all, that book put her on my Heroines that Don't Annoy Me list. But in this one, she was really quite bossy and seemed to be shouting all the time. I will give her the benefit of the doubt, as she was clearly under duress for much of it. But I do hope she settles down a bit for House of Many Ways.

Based on my reaction, I can see why a lot of authors don't like to make sequels to books that have a "happily ever after" sort of ending. I kept hoping for more Sophie and Howl, more Calcifer, more of anyone from the first book, and probably didn't give the characters in this book a real chance to shine for me. Once, Abdullah said something about his chosen princess, Flower-in-the-Night, having twice the smarts of Sophie, and I felt offended on Sophie's behalf! Oh, dear. Clearly, I have attachment issues. And in that way, I can't blame authors for keeping their characters happily ever after lives private. Because readers like me... well, we just can't get enough!

Kudos to Wynne Jones, then, in her kindness to randomly return to Howl's world and give us glimpses into the ongoing lives of our favorite characters. I'm grateful to her for that. And even though Abdullah and Flower-in-the-Night don't hold a candle to Howl and Sophie for me, they're pretty good people on their own. I have come to depend on Wynne Jones to populate her books with practical and likeable females; she does just that in this book, and I love it. Good for her!
Musings by Aarti at 11:54 AM