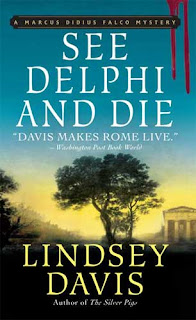 From Booklist
*Starred Review* If Sam Spade traveled back in time to A.D. 76, he'd be Marcus Didius Falco, the Roman sleuth at the center of Davis' mordant series. In the seventeenth outing, Marcus, who tackles crime on behalf of the emperor (and with the help of his tart-tongued wife, Helena), casts his cynical gaze on the case of two women who met their demise on tours of Olympia, Greece. Both women perished during excursions sponsored by Seven Sights, a dubious travel agency whose slippery host dispenses a litany of lies. Marcus focuses on the more recent victim, Valeria Ventidia, who was found beaten to death with a long-jumper's hand weight. Although there's no shortage of suspects among Seven Sights' colorful clientele, Valeria's shifty, jealous husband is at the top of the list. Davis provides vibrant period detail, from majestic Greek temples and teeming Roman slums to reprehensible rulers sporting tunics trimmed with gold. Some readers of this series may have difficulty accepting the hard-boiled veneer that Davis lays over ancient Rome, but for those willing to suspend disbelief, it makes a marvelous conceit.

I had to pick one book to read and finish before leaving for India, so of course I went to my tried and true authors. I picked up Naomi Novik's Empire of Ivory, since I haven't picked that series up for a long time. But I just couldn't get into it. It's coming with me to India, though, so maybe it will work there. However, while hanging out with Temeraire, I just couldn't imagine going another month without Marcus Didius Falco, so to Delphi I went!

Sadly, it wasn't enough to write home about ;-) Actually, that's unfair. I didn't much care for the plot of this Falco outing. I didn't find it as interesting or engaging. It was a somewhat motley crew assembled, none of whom knew each other all that well. Thus, there wasn't as much chemistry between the characters as I'm used to seeing in Falco books. I can see why Davis brought new people in, though- the series is almost 20 books long now. She needs new drama.

I did enjoy seeing Falco and Helena on their own a bit more this outing, though. There is so much romance and respect in their marriage, and it comes out so well in the books. It's made somewhat more poignant, as well, since Davis's own husband passed away recently of cancer.

I also enjoyed the way Davis wove Greek mythology into the novel, and the way that all the Roman characters reacted to it. Greece was past its prime when Rome had ascended, and it was interesting to see how the characters reacted to Greek culture and ruins. It was also a bit jarring (but fun!) to see ancient Romans going around and viewing ancient ruins themselves. How many things did they see that we never will? It was fun and informative, the way that mythology should be. And who knew there was that much cannibalism in the ancient stories? I never know how far Davis stretches historical fact into plotline, but I don't mind since it's so fun to read.

Overall, not my favorite Falco outing, but I love him so much I don't mind! I wonder how many more Falco novels will be coming- I am sadly nearing the end of the series! And it looks like Davis may be switching more to medieval fiction going forward. I'm excited about her new book coming out- hopefully it has the humor and sarcasm that the Falco series has.

I promise to try and post a list of the books I'm taking to India with me before I leave- and then after that, I'm off to the Motherland!
Musings by Aarti at 7:27 PM