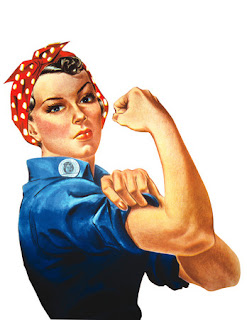 This week's post (the first guest post!) is from a long-time book friend, Marg, who writes over at Reading Adventures. Marg and I "met" on the Historical Fiction forum- I think that is the forum that got me into blogging, way back when, so she is one of the forces behind this blog! Marg hails from Australia, and she reads a lot of historical fiction, mysteries and romance novels, some with a more fantastical element as well. Clearly we'd be friends, based on our book tastes! I highly recommend her blog.

And now, without further ado- here is Marg's excellent post:

One of my great loves, genre wise, is Historical Fiction, and so for this week's Rosie's Riveters, I have looked to the past, and chosen the formidable Eleanor of Aquitaine.

My early introductions to Eleanor were in Sharon Penman's excellent novels. There is a particular focus on her relationship with Henry II in the trilogy that starts with When Christ and His Saints Slept, and then continues with Time and Chance and then Devil's Brood. In addition she is one of the supporting characters in the Justin de Quincey mystery series.

Sharon Penman is not the only author to feature Eleanor to some degree. Even when she is just a supporting character any mention of her will capture my attention. Other books that she has appeared in that I have read include the historical mystery The Serpent's Tale by Ariana Franklin and also in Elizabeth Chadwick's excellent William Marshal novels, particularly The Greatest Knight.

I think that my impression of Eleanor of Aquitaine is of a woman who was beautiful, but also powerful and driven. Other adjectives I might use are passionate, political, single minded and formidable.

The only name that came to mind was Susan Sarandon, which seems strange given that she isn't royal or anything like that. I guess the comparison comes from the fact that Susan Sarandon has chosen to go against what might have been considered the societal norms of the day by living with a much younger man, not really giving a damn what anyone thinks, and being passionately involved in the causes that she chooses to get involved in.


What makes her riveting?

Eleanor of Aquitaine is riveting to me because she was a powerful woman in her own right, who married two powerful men, was queen of two countries, and was mother to two kings. She was apparently a great beauty of her time and lived an adventurous and tumultuous life.

She was queen of until she divorced Louis VII. Not long after she married Henry II with whom it would appear she had a very passionate union, both when they were happy, and when they were passionately against each other. With Louis she had two daughters, and with Henry she had five sons and three daughters. Two of those sons would go on to become King of England, Richard the Lionheart and King John and Eleanor acted as regent for a time for Richard while he was on crusade. Eleanor herself had gone to with her then husband Louis VII during the second crusade.

For a long time Eleanor was imprisoned by Henry for aiding their son in a rebellion against Henry and was released only for limited periods of time.

From this distance it is probably hard to know what Eleanor was truly like, but she is certainly a woman who left her mark on history when so many women were defined by their marriage and many were just footnotes in the notes. She managed to hold onto her lands, managed to get out of an unhappy marriage during a time when divorce was very difficult, and managed to leave a lasting impression through the ages.

If there is one thing that I would say that isn't a point in her favour it is that it appears that Eleanor wasn't the most maternal of women, although when you look through the family history, it appears that being a Plantagenet was to be quite a volatile character. I remember reading a quote once, but I can't remember who said it, something along the lines of "if you want to read about dysfunctional families, look no further than the Plantagenets".

I would absolutely recommend reading any of the books that I mentioned above, not only because Eleanor features in them, but also because they are excellent books in their own right.

My image of Eleanor of Aquitaine has I think been irrevocably influenced by the experience of watching a movie from 1968 called Lion in Winter. Katharine Hepburn won an Oscar for her performance as Eleanor and other cast members included Peter O'Toole and a couple of young actors called Anthony Hopkins and Timothy Dalton.

I thought I would close this post by sharing a Youtube video of Katharine Hepburn as Eleanor of Aquitaine. The film is set in Chinon at Christmas in 1183. Eleanor has been released from prison for the holidays, and the whole family is involved in scheming and plotting, and maneuvering to be the next person to wear the crown.


Thanks so much Aarti for coming up with a great idea and letting me play along. I hope that you find Eleanor of Aquitaine a worth recipient of the Rosie's Riveters treatment!